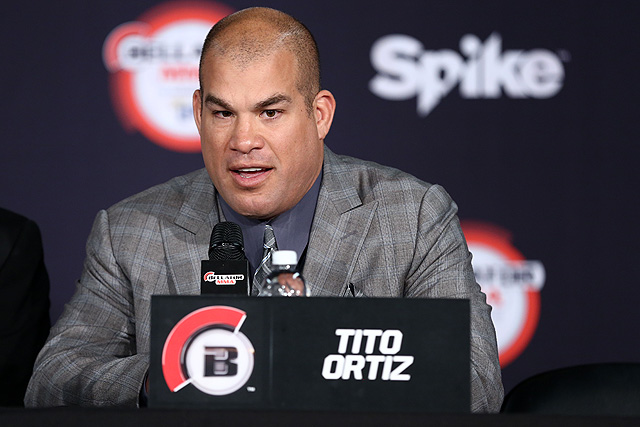 
For a while, it looked like Tito Ortiz’s resurgence was going to continue at the expense of Liam McGeary.

The former UFC light heavyweight king started quickly in his quest for another title at Bellator 142 “Dynamite,” as he took down McGeary, escaped a guillotine attempt and proceeded to unleash punches and elbows on his lanky British adversary. Had Ortiz survived another 19 seconds, it is likely he could have banked the first round.

Instead, “The Huntington Beach Bad Boy” learned just how versatile McGeary’s guard can be. After slamming his way out of an armbar, Ortiz found himself ensnared in an inverted triangle. The tap came at the 4:41 mark of round one, leaving an obviously frustrated Ortiz to ponder what might have been.

“I’m still trying to lick my wounds a little bit. He fought the best that I can give. I had a great camp. Everything went perfect. I went there and I fought my ass off,” Ortiz said during Saturday’s post-fight press conference. “The guy’s slick, dude. That reverse triangle. We defended that over and over. I got away from the armlock... I was going to let him break my arm before anything. I pulled out and came back down and those long limbs just latched around me. He was the better man.”

McGeary said he expected Ortiz to try and plant him on the canvas. It was simply a matter of staying calm once it happened.

“I knew he was gonna shoot in for a takedown. I knew he was gonna be strong. He’s got that old man strength,” said McGeary, who has five career victories via submission. “He got a good grip on my arm. I was trying not to panic about it. I could see his fists coming toward my face. I knew I was gonna get my arm out, it was just a matter of time. I was waiting for the punches to come in; I had my knee blocking it. That’s the handy thing about being so long is I can block a lot of stuff. I can move around a little bit. I can get out of a lot of danger.”

Ortiz’s first submission loss in nearly 16 years halted a two-bout winning streak for the 31-fight veteran. Although he looked relatively strong on Saturday night, Ortiz wasn’t ready to speculate on the date of his next Bellator appearance.

As far as me coming back, I’ll wait,” he said. “I’m gonna chill for a little bit. I’m just gonna enjoy this time right now. I missed out on the summer; I missed out on a lot of time with my family. I’m 40 years old, man. I’ve been doing this s--- for 18 and a half years, a l lot longer than everyone up here has been doing it. I’ve had some major surgeries: back surgeries, neck surgeries, knee surgeries.