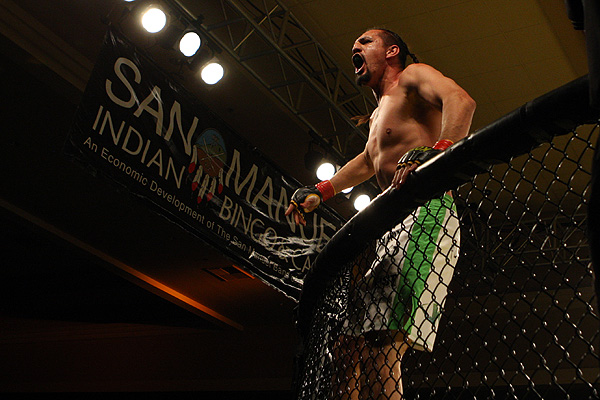 HIGHLAND, Calif. -- Keeping up his ever-busy schedule, Tony Lopez successfully defended his King of the Cage heavyweight title for the second time in less than two weeks against Victorville, Calif.’s Jason Walraven in the headliner of Thursday’s KOTC “Hardcore” at the San Manuel Indian Bingo and Casino.

Though ambitiously scheduled to feature three title fights, “Hardcore” was defined by concise, decisive bouts between sturdy vets and inexperienced upstarts, embodied in the Lopez-Walraven headliner.

Walraven, fighting out of Joe Stevenson’s Cobra Kai gym, grounded the champion early but could not keep the savvy Lopez down long. Lopez sprawled on the next takedown attempt and stunned Walraven with a sweeping elbow to the side of his head. With Walraven on the ropes, Lopez spun around to mount and unleashed an unanswered series of punches until referee Mike Beltran called a stop to the bout at 2:48 of round one.

Lopez, who defended his title against Cody East in Thackerville, Okla., on April 14, now stands at 31-8 and is undefeated in his last seven.

Originally scheduled to fight former 160-pound champion Dom O’Grady, former KOTC welterweight champion David Gomez sought to recapture his title against late replacement Matt Conte, who failed to make weight and was thus unable to vie for the title in his own right.

The extra weight was clearly visible on the out-of-shape Las Vegas fighter, though it hindered him little as he pounced quickly with a takedown on Gomez. However, when Gomez reversed into top position, Conte was nigh-immobile. From there, the Shark Tank product would lay down a barrage of unanswered if not devastating punches to Conte’s head until referee Nelson Hamilton saw fit to halt the bout at just 2:05 of the first round, giving Gomez his second reign as a King of the Cage titlist.

In December, undefeated CQuence Jiu-Jitsu purple belt Sean Strickland easily defeated veteran King of the Cage champion Brandon Hunt but failed to make weight for the middleweight bout, costing himself Hunt’s title in the process. The two met again to bring closure to the title picture but began their rematch tepidly, eliciting boos from the Highland audience.

The jeers seemed to prompt Perris, Calif.’s Strickland to bully the Mash Fight Team rep to the mat, gaining side control in the process. Strickland cut immediately to the chase, posturing up and landing repeated punches to the side of the half-turned Hunt’s head. Strickland’s long limbs provided the leverage necessary to quickly turn out Hunt’s lights, prompting Mike Beltran to halt the bout at 3:24 of the opening round.

Strickland’s second win over Hunt awarded him the title and further extended his unbeaten mark to 9-0.

Undefeated Johnny Cisneros found himself in the deepest water of his career, going a full three rounds for the first time against Team Quest wrestler Walter Selva in their middleweight tilt.

The wildly popular Michael Guymon pupil was unable to run through Selva as easily as he might have been accustomed to, as Selva’s wrestling countered Cisnero’s early takedown attempts and kept the two exchanging strikes throughout the round. Cisneros found his groove in the second frame, as the brawler established a surprising jab, bloodying Selva and setting up takedowns as his foe faded. Cisneros changed his strategy for the final round, repeatedly grounding Selva and stifling him on the mat and even obtaining mount in the bout’s waning moments.

Judges Cecil Peoples, Larry Landless and Lester Griffin all saw the bout for Cisneros on scores of 29-28, 29-27, and 30-26, respectively, moving his unbeaten record to 6-0.

Former King of the Cage 135-pound title challenger Marvin Garcia found his infamous aggression matched for the first time, as Armenian transplant Gor Mnatsakanyan went tit-for-tat with the United BJJ representative. However, Mnatsakanyan would ultimately pay the price for this approach, as Garcia’s ever-present overhand right finally found the mark, dropping Mnatsaknyan in a heap. As a dazed Mnatsaknyan attempted to armbar referee Beltran, Garcia walked away with the emphatic knockout win 3:55 into the bout.

Looking to bounce back from a recent 1-5 skid, Richard Schiller utilized a clinch-heavy attack to wear down Chris Culley in their 150-pound catchweight bout. Schiller locked up a guillotine choke in a second-round scramble, putting Culley to sleep at 1:48 of round two.

Millenia MMA welterweight Stephen Martinez made quick work of grappling-deficient Gabriel Godly, tapping him with a reverse triangle armbar at 2:23 of opening round.

In the show’s opening bout, welterweight Sam Liera survived a late first-round rally from John Mercurio to TKO his foe with punches at 29 seconds of the second round.