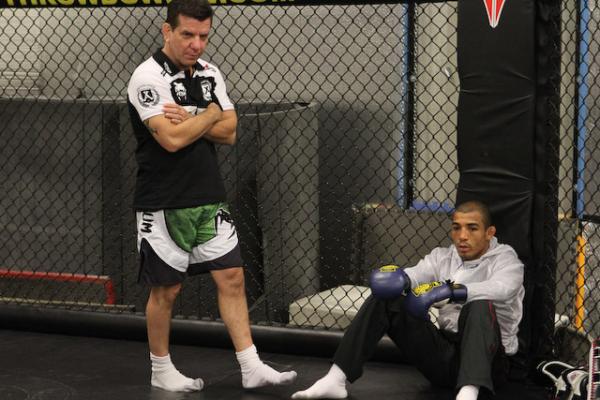 In the interview, Pederneiras discusses the highly-scrutininzed weight-cutting practices at the Brazilian camp, how Renan Barao would have fared had his rematch with T.J. Dillashaw taken place as expected at UFC 177 and if Jose Aldo is on schedule to make the featherweight mark in October.

Sherdog.com: How do you analyze the performance of Leonardo Santos against Efrain Escudero? I´ve heard he had a really hard time making weight.
Andre Pederneiras: He was better in first round. In the second round, he got punched in the nape, and from that point on he just turned off. You could see that he was totally dizzy. Could it be because of dehydration process? Yes, but I need to see the fight again to re-evaluate. In the interval to the third round I asked, ‘How are you?’ and he said, “I´m ok, I can hear you.” So I told him: “You’re gonna touch him and get out. Don’t stop in front of him. Exchange some punches so that he will give you space to take him down.”

Sherdog.com: Santos reached good positions on the ground twice, but he could not get the submission.
Pederneiras: Efrain is tough in the ground. Leo reached nice positions both in first and second rounds, but Escudero defended well.

Sherdog.com: How hard was it for him to make weight this time?
Pederneiras: While he he was away from fighting for six weeks he gained a lot of weight. He was almost 195 pounds. So we started to cut weight, but we could not take too much otherwise it would affect his training. It´s a hard decision. If you cut too much weight before, the athlete doesnt train well. If you cut close to the fight, his performance gets worse. So I told him if you weight more than 178 pounds, I´ll kill you.

Sherdog.com: What are your thoughts after what happened to Barao and Santos?
Pederneiras: The conclusion is to never weigh more than 22 pounds from your division. But the biggest problem is that we don’t have a fixed calendar. You’re gonna fight January, May and December. We dont have it. You got the invitation two months before. Everybody takes vacation after three months of diet and a strong camp. It´s natural that when you release the fighter he will eat a lot and gain weight. We have a rule in Nova Uniao that we dont allow anyone to gain more than 26 pounds. Anyone who breaks this rule has a problem.

Sherdog.com: What about Jose Aldo? Is he close to making weight to fight Chad Mendes in October?
Pederneiras: Aldo never gets too heavy. Naturally he stays 17 to 19 pounds heavy for his division training normally. His normal weight is 165 pounds, so he doesn’t suffer to cut weight.

Sherdog.com: Which of your fighters suffers the most to make weight?
Pederneiras: Barao, Hacran [Dias] and Leo now, because of this situation. But actually this was the only time that happened, the other time he made weight by jumping rope.

Sherdog.com: Do you think it was fair that Renan Barao left UFC 177 without any payment?
Pederneiras: Yes. I have to think it was fair once you have a contract that says that you are paid to make weight and fight. If the fighter couldn’t make weight and fight, he broke the contract. I don’t see why he should get paid if he broke the contract. I can’t say it´s wrong, because if it happens in my event, Shooto, I would do the same. It was pretty clear once Renan didn’t cover the contract. That´s what I say to everybody: My biggest concern when one of my fighters will fight is making weight. That´s my only obligation when we sign a contract. Win or lose, nobody is obligated by contract. This weekend I completed the 864th fight involving my athletes. If you analyze why Ronny Markes didn’t made weight once it was because he decided to do it his way and now Barao. In 864 fights it hapened twice. It´s important to say that we have a weight loss program. And we have been using it more than eight years. The program is being tested by UFRJ (Rio de Janeiro Federal University), one of the most renowed in Brazil. Next week we are going to have all the numbers analyzed.

Sherdog.com: So your weight cut program is being studied?
Pederneiras: All the fighters are being analyzed one month before. Santos and Barao participated in that research, one day before -- on the day of weigh-ins and on the day of the fight. This research will show what they could and could not recover. In one week I´ll have all results to show everybody that we are doing a responsible program. We have a doctor and nutritionist involved for a long time.

Sherdog.com: What would have happened in the rematch between Dillashaw and Barao?
Pederneiras: It is hard to say. What I can say is that Barao was much better prepared for this fight. If I say he was not well trained in the first, I would take the credit away from T.J.’s win, and that wouldn’t be fair since T.J. fought so well that night. I can say he was not in the peak of his training. Nobody can reach his best fighting in February and then again in May. Everybody who works with athletes knows that a fighter can reach his best at most twice in a year. I can say he was not at his peak in the first, and for the rematch he was in a really great shape. Unfortunately that didnt happen, so let´s wait for the UFC´s decision now.