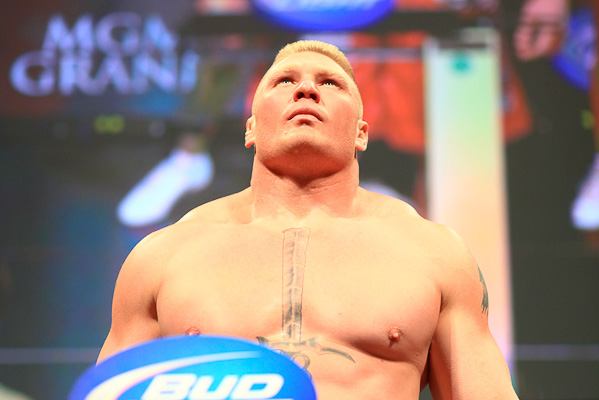 Brock Lesnar has been retired from MMA for a couple of years now, but there have been plenty of rumors lately suggesting he could return.

In an interview with the Sherdog Radio Network’s “Beatdown” show, trainer Greg Nelson discussed the former UFC heavyweight champion, his chances if he fought again and more.


Advertisement
On whether he has communicated with Lesnar lately: “I have not talked to Brock for quite a while, probably months, months. He really is a recluse -- when it comes to when he’s not in the limelight, he is gone. He has property in Canada. He has property obviously in northern Minnesota and he goes hunting in Wyoming. I mean, the guy, when he’s not doing something, he is with his family and he’s like an absolute ninja. It’s pretty funny. Unless there’s training going on, I don’t really talk to him much.”

On whether Lesnar reached his potential in MMA: “I’ll tell you this. He was literally one of the best athletes that I’ve ever worked with. … When he first came to me, he said, ‘Greg, I know how to wrestle and I’ve been in the entertainment business now for a number of years. I know how to pull a crowd.’ He goes, ‘But as far as striking and the submissions, I’m a blank book and I just want to be filled in.’ He was like that; he was like a sponge. He really likes his training. His format was, if it was on the board, it wouldn’t matter what it was -- it could be the most crazy training session ever, but if it was down … he would work it to the max. It was awesome. I think mentally, the diverticulitis, that was the big thing [that led to his retirement].”

On whether Lesnar could be successful if he fought again: “I believe so. If he came back and he was 100-percent mentally in the game, knowing that he could take whatever it meant to take, he could push himself, he could get hit, he could whatever -- that was the big thing. When he was mentally on, I mean, literally, like his moniker when he was a college wrestler, he was like a freight train. He just was going to go through anything. If he came back and he was mentally 100-percent there, I believe physically he still has the gifts and he still has the ability to improve and to grow, but it’s like anything. The game is such a mental thing that once that chink in the armor was there and that kind of embedded itself in his head, I think that was really the point where it was tough for him.”

On whether Lesnar should return: “If he came back and he really wanted to train and really wanted to do it and his heart was in it, it would be great. He was a pleasure to work with because he was a real professional. You talk about a professional in training, Brock Lesnar’s a huge professional. When training starts at 10 o’clock, that means 10 o’clock wrapped, ready and warming up. … The other thing with Brock is he would pay his training partners just like boxers pay people to come in, and he would basically say, ‘You’re like an employee now; you have to be here. This is a professional thing, and if you don’t, I’ll just let you go.’ He really does train like a professional. … If his mind’s into it and he really wants to do it, it’d be great.”