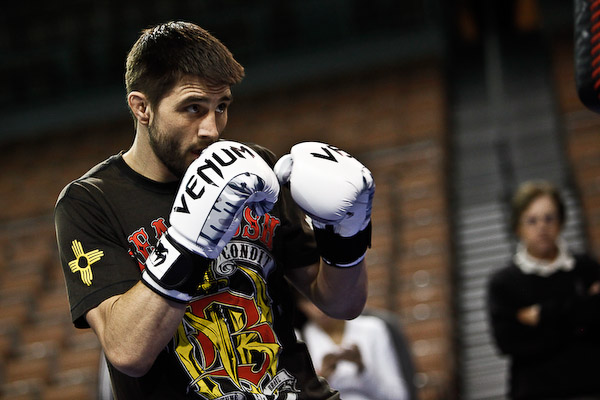 In studying footage of Carlos Condit ahead of Georges St. Pierre’s bout against him Nov. 17 at UFC 154, trainer Firas Zahabi has noticed one danger above all others: Condit’s unpredictability.

If Condit kicked low regularly, for instance, St. Pierre might drill a straight right counter. But Condit does much more than throw a few telegraphed kicks.

Zahabi puts Condit on the muay Thai end of the striking spectrum as compared to the majority of welterweights, whom he considers boxers.

“The angles are different,” Zahabi said. “The techniques, the attacks are different. I’m getting Georges to do a lot more muay Thai for this fight. I’m making him do knees also, putting on the chest guards and doing days where we practice the knees. Carlos is very good with the knees, the flying knee. He’s got long legs. He knows how to use the spear knee to counter your punching. You can’t really get into a low boxing stance because of the way his style is. You can end up kneed in the head or kicked in the head really hard. We’re going to have to adjust Georges’ style for that.”

One fighter helping St. Pierre train for the matchup, which will unify the UFC welterweight titles, is Stephen “Wonderboy” Thompson.

“Wonderboy, he’s able to mimic any style,” Zahabi said. “He’s able to fight righty and southpaw. I noticed that Condit sometimes switches it up a little bit during his combinations, not before. I want to make sure to bring that in, and a lot of jiu-jitsu guys. We’re very [friendly] with the jiu-jitsu guys from Renzo Gracie’s.”

Listen to the full interview (beginning at 1:43).