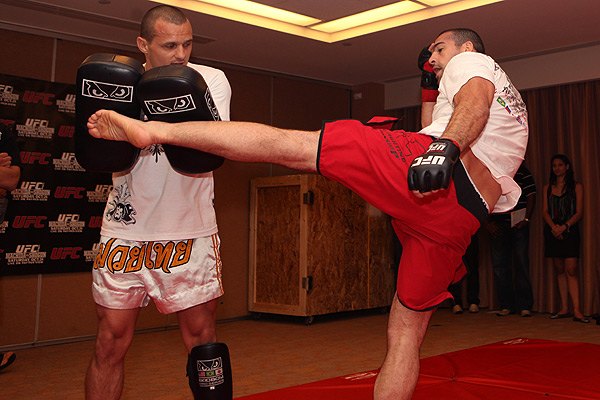 Although it didn’t come in spectacular fashion, Mauricio “Shogun” Rua returned home to Curitiba, Brazil, with a technical knockout win after Saturday’s UFC on Fox 4 encounter with Brandon Vera.

Andre “Dida” Amado, head coach of the former UFC light heavyweight champ, told Sherdog.com this week that he was happy Rua followed their strategy, which included surprising takedown attempts from the standup-oriented Brazilian.

“Our tactic was for Shogun to use his muay Thai, close the distance and get takedowns, where Vera is weaker,” said Dida. “And he did it. He got the takedowns and worked well on the ground. Sergio Moraes was very important in this game plan. Vera did connect with some strong blows, but Shogun held up and got the victory.”

Dida, however, did not shy away from criticism regarding Rua’s physical conditioning. The onetime Pride Fighting Championships star began showing signs of fatigue in the second round of the bout, which eventually ended in a TKO stoppage late in the fourth.

“Mauricio did well in the gym. We hired a few sparring partners, had good physical preparation. I followed everything and it was perfect,” Dida reflected. “But this fatigue was a surprise, more for Shogun than for us. He was good in muay Thai, jiu-jitsu and takedowns, but he ran out of gas. We’ll let him rest now, but we need to talk, because something happened for sure.”

Dida said he’ll meet with his staff to correct any mistakes from the previous training camp before planning Rua’s next session. The question of who Rua will face next remains a mystery, having lost a chance at a UFC title shot to former rival Lyoto Machida. In considering potential opponents, Dida pointed out the name of a fighter on the rise: 25-year-old Swede Alexander Gustafsson.

“When ‘Rampage’ [Quinton Jackson] was hurt, we thought about that fight,” Dida said. “Gustafsson would be a good opponent. Shogun only has good fights, so whoever fights him is going to war. We were joking that he could make a shirt, like ‘Shogun War.’

“The guy goes up and expends a lot of cardio, so we have to analyze this aspect of conditioning. Against Gustafsson would be another war. We would have to study them, but I can already imagine them brawling.”