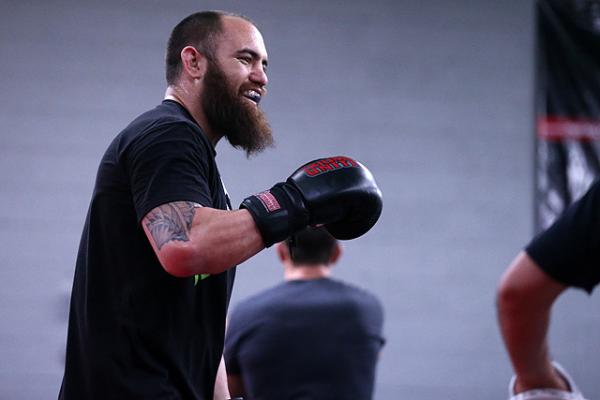 Browne says his relationship with Rousey began in the gym. | Photo: Dave Mandel/Sherdog.com


UFC heavyweight Travis Browne today confirmed rumors that he and women’s bantamweight superstar Ronda Rousey are in a relationship, though he refused to categorize the pair as “boyfriend and girlfriend.”

During an appearance on Monday’s edition of “The MMA Hour”, Browne explained that he and Rousey -- both of whom train at Glendale Fighting Club in Los Angeles -- bonded over the summer when Browne was accused of domestic violence by his wife, fitness model Jenna Renee Webb.

“Over the summer, through all the shit that I had to sift through, Ronda and I started talking,” Browne told host Ariel Helwani. “I’ll say now that we are together. She’s my woman and I’m her man. There’s no boyfriend-girlfriend stuff. There’s no ‘dating.’ We’re together.”

Although Rousey’s profile continues to grow by the day, Browne, 33, said that he doesn’t view the unbeaten 28-year-old as a superstar, but rather as an extremely dedicated athlete who is also a “sweetheart.”

“I’d gotten to know her through the gym and all that kind of stuff, so I see her for who she is,” said Browne. “The fact that she’s out there winning ESPYs... That’s all great, but that’s not who I know her as. I know her as one of the hardest-working athletes that I’ve ever seen, in this gym, busting her ass on a daily basis.”

After Browne was reinstated, Webb said that she would press charges against him. However, according to Browne, those charges have yet to materialize.

“That never happened,” stated Browne, who said he has no communication with Webb today. “I don’t feel like it’s going to.”