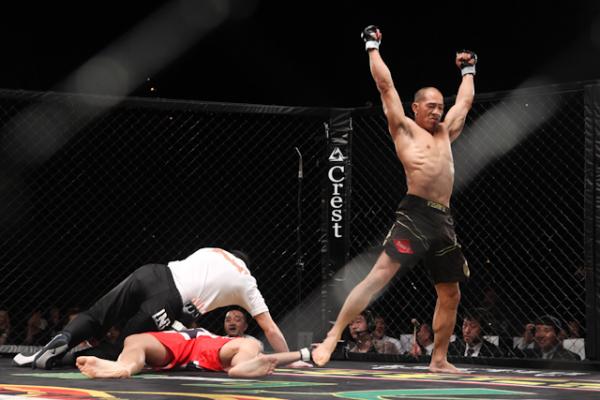 Katsunori Tsuda scored a crushing knockout and, with it, a title shot. | Dean Marchand/Sherdog.com


TOKYO -- Katsunori Tsuda needed little time to prove he deserves the next shot at Kazunori Yokota’s Deep featherweight title, knocking out Tatsunao Nagakura in the opening round of their main event fight at Deep “Cage Impact 2013” on Sunday night.

After mocking Nagakura’s pre-fight haka ritual, the southpaw Tsuda started the fight seemingly brimming with confidence. The self-assuredness paid off early as the Tsudanuma Dojo product timed a perfect takedown-feint with a huge right hook that flattened Nagakura. Tsuda immediately pounced into mount and threw in a few hard punches before referee Masato Fukuda dove in to stop the fight only 1:19 in.

“These days, everyone is always talking about American MMA, but I want to make the Japanese scene strong again,” Tsuda told the Tokyo Dome City Hall crowd. “I want American fighters to start coming here to fight again.”

The win sets up a future bout with champion Yokota, who joined Tsuda in the cage.

“He’s a good fighter, but the guys he’s beaten aren’t like the guys I’ve beaten,” Yokota remarked. “I’m going to overwhelm him.”

After filling in for an injured Yoshiki Harada on two days’ notice, Korean Doo Li Song found himself in too deep in his non-title match with Yokota. The champion used takedowns to wear down the young fill-in, eventually moving to mount in the second round and pounding away until a late stoppage from referee Yuji Shimada finally came at the 4-minute mark.

After the win, Yokota admitted he had been nervous leading up to the fight, though not for the fight itself, but because former Prime Minister Yoshihiko Noda, a noted pro-wrestling and MMA fan, had come to watch the bout. 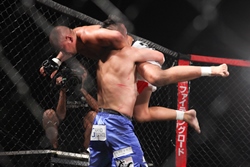 The seasoned judoka made 200-pound Sakuragi seem like a lightweight, picking him up for big slams and tossing him to the ground on multiple occasions. Sakuragi had no answers for the former Yoshida Dojo leader’s top game, eventually succumbing to a tight arm-triangle choke 2:49 into round three.

In a closely contested bantamweight matchup, former champion Takafumi Otsuka outwrestled Paraestra Chiba’s Toshiaki Kitada, earning a unanimous decision victory. Despite being fought mostly from the clinch position, the bout went back and forth, coming down to little more than a few split-second takedowns from the younger Otsuka. With the victory, Otsuka improves his record to 16-12-1 and sets himself up for another shot at his former title.

In his first fight in Japan in six years, Yoshiyuki Yoshida completely dominated Korean striker Won Sik Park on the ground, submitting him with a rear-naked choke 4:46 into the second round.

At bantamweight, heavy-hitter Yusaku Nakamura earned a nice comeback victory, taking out “Iron” Hiroshi Nakamura with a walk-off KO after being controlled for the first two rounds. Iron used his powerful wrestling to control the pace in rounds one and two, but a beautifully timed knee from Yusaku caught the Bellator veteran right on the chin as he shot in for a takedown, laying him flat at the 53-second mark of round three.

In a rather sludgy welterweight affair, Akihiro Gono and Yuki Okano pushed an awfully slow pace en route to a split draw.

At featherweight, former Shooto champion Hideki Kadowaki found himself on the receiving end of a rear-naked choke from Brazilian expat Kleber Koike Erbst, tapping out 4:21 into round one.

Deep Megaton division mainstay Seigo Mizuguchi made quick work of Jong Wang Kim, putting him down with a right hand and pounding his way to a first round referee stoppage at 1:31 of the super-heavyweight encounter.

In a duel of lanky lightweights, Juri Ohara and Yukinari Tamura fought to a split draw at the end of two rounds.

Earlier, Hiroyuki Kobayashi bloodied up Masato Kobayashi on his way to a unanimous decision in their bantamweight match-up.

In women’s action, Shizuka Sugiyama and Ji Yun Kim also fought to a split draw, with Sugiyama taking the first round but gassing in the second.

In another bantamweight bout, Daisuke Endo put Kintaro out with a rear-naked choke 4:36 into round one.

In the night’s opening fights, Kota Ishibashi finished Yuma Horiuchi with a rear-naked choke 55 seconds into round one, while Kennosuke Oyama used a triangle choke to submit Yusaku Fujisawa at the 2:13 mark of round two.