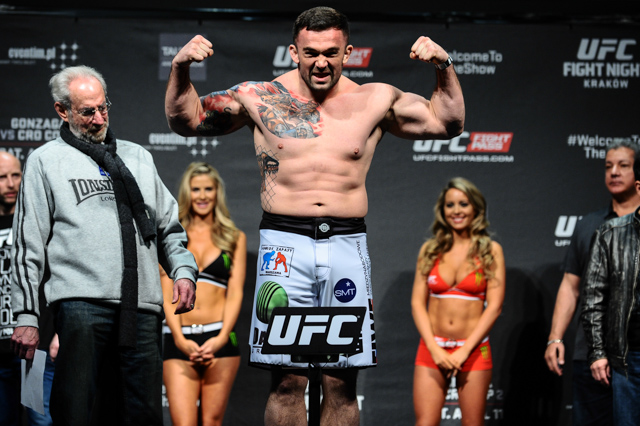 Daniel Omielanczuk is 1-2 in the UFC. | Piotr Pedziszewski/Sherdog.com


The UFC’s July 18 trip to Glasgow has a pair of new matchups, as Daniel Omielanczuk faces Konstantin Erokhin at heavyweight, while Jake Matthews meets Mickael Lebout in a lightweight scrap.

The Las Vegas-based promotion recently announced the fights. The UFC Fight Night bill takes place at the SSE Hydro Arena in Glasgow and in headlined by a middleweight confrontation pitting Michael Bisping against Thales Leites.

Erokhin lost a three-round verdict to Viktor Pesta in his initial Octagon foray at UFC on Fox 14 this past January. The 33-year-old Russian is 9-2 as a professional, with eight victories via knockout or technical knockout.

The 20-year-old Matthews suffered the first loss of his pro tenure on May 10, as he tapped to a James Vick guillotine choke at UFC Fight Night “Hunt vs. Miocic.” Matthews defeated Dashon Johnson and Vagner Rocha in his first two UFC appearances.

Lebout saw a six-fight winning streak come to an end on April 11 when he lost a decision to Sergio Moraes at UFC Fight Night in Poland. The 27-year-old Frenchman owns a 13-4-1 career mark, including six triumphs via submission.