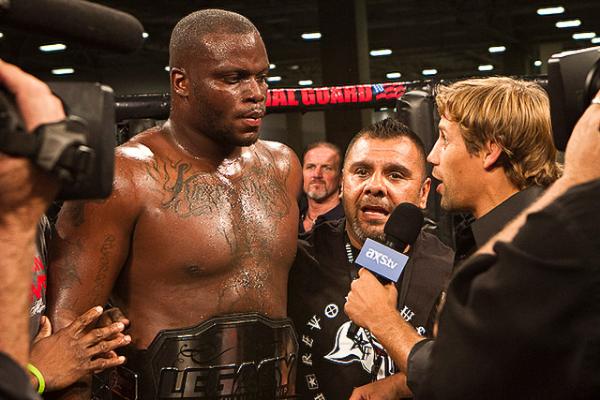 Promotion officials recently announced that Derrick Lewis will defend his heavyweight strap against Ricky Shivers and lightweight king Jorge Patino will take on Derrick Krantz at LFC 18. Additionally, the card will feature a flyweight scrap between unbeaten Rafael de Freitas and WEC veteran Antonio Banuelos. The event takes place at the Arena Theater and will be televised by AXS TV.

A onetime Bellator competitor, Lewis is unbeaten in his last five outings. Most recently, “The Black Beast” scored a second-round knockout of Jared Rosholt at LFC 13 in August. The Silverback MMA representative has finished all eight of his professional victories, stopping seven opponents by knockout or technical knockout.

Shivers carries a two-fight winning streak into his meeting with Lewis. The longtime Alaska Fighting Championship stalwart has competed just once thus far in 2012, stopping Mychal Clark with punches in June.

Patino is unbeaten in three appearances under the LFC banner, including five-round triumphs over Pete Spratt and Mike Bronzoulis in 2011. The 39-year-old Macaco Gold Team representative has competed in Pride, the UFC and Strikeforce during a 43-fight professional tenure.

Krantz is 3-1 in 2012, with his only loss coming at the hands of Andrey Koreshkov at Bellator 69 in May. “D-Rock” has since rebounded to defeat Brandon Farran at LFC 14 and Charles Byrd at LFC 16 in his next two bouts.