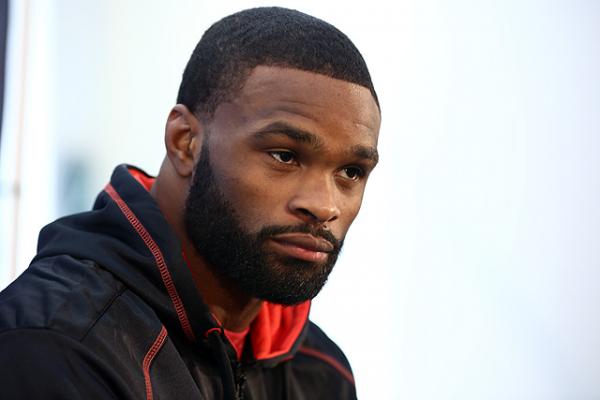 Tyron Woodley will look to continue his ascent through the Ultimate Fighting Championship’s welterweight ranks this weekend when he fights Rory MacDonald at UFC 174.

During an appearance on the Sherdog Radio Network this week, “The Chosen One” spoke about how he feels the UFC’s 170-pound title picture has been watered down by rematches and how it hurts the sport of MMA as a whole.

“I think we need to have some consistency and a rubric to make it more of a sport,” Woodley said. “I feel like [there are] guys that are legitimately putting themselves in that position to fight for the title by working so hard, and we should be given that shot, not just look at the fans saying, ‘That was a good fight. I want to see it again.’ OK, well, if you saw the NBA finals and it was a great series between the Heat and OKC, you don’t get to run it back just because it was a great last game of the series. The winner’s the winner.”

Woodley refers to Robbie Lawler’s path to the title against Johny Hendricks at UFC 171 and what now appears to be a fast track towards a rematch with the incumbent champion, pending a clean bill of health.

Since defeating Carlos Condit in the UFC 171 co-main event, Woodley has been on the shelf awaiting an opponent. Lawler has already defeated Jake Ellenberger and now is poised to be named the next in line for a title shot if he can top Matt Brown next month at UFC on Fox 12. The former University of Missouri Tiger takes exception to such matchmaking.

“I think the interest is there [for a rematch]. As a fan and friend of Robbie, I think it was a great fight. When in the history of MMA did a guy that just came out of, not a quick knockout, but a five-round war, get signed up so quickly for the next fight? A fight in May, then right back in there in July,” Woodley explained. “He’s already been set up with two fights. He will fight two times by the time I fight once. I think that if I get another chance to fight someone else in between, then I am the number one contender now.”

Lawler’s opponent for July was also addressed. Woodley questioned how a fighter coming off a significant injury -- and one who has fought lesser competition -- can be flung into the title picture before Woodley has his say.

“I think that Matt Brown is a tough guy. I like watching him. He comes for blood and you can never count him out. He has seven wins in a row, which is huge, but none of the guys are in the top 10, which is not as huge,” Woodley said. “Before he went on that tear, he was nearly 12-11, .500 in record. I can see how all these things are playing out, but I think maybe that bout should be the next in line to fight the winner of me and Johny.”

In the end, the 32-year old is more than aware that he can take hold of this situation with an impressive showing against MacDonald in Seattle. But Woodley suggests that if those involved in choosing the bouts continue to book based on what is best for selling pay-per-views instead of the sport as a whole, the value of championships will continue to be in question.

“I feel like all these unwarranted rematches in our sport are making the belt not as credible as it should be.”