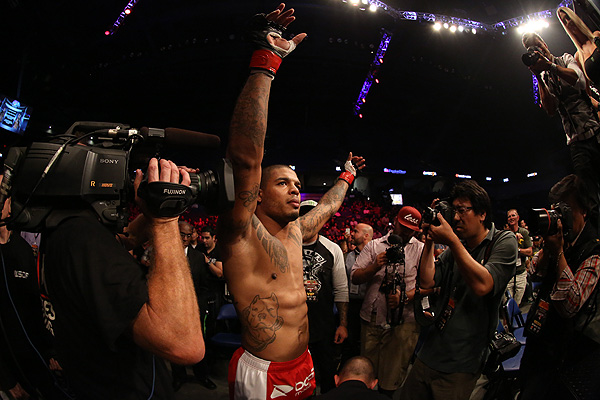 
Before Tyrone Spong makes his highly-anticipated mixed martial arts return at WSOF 22 on Aug. 1, he will step into the boxing ring -- or more accurately, the Pit -- in hopes of capturing championship gold.

Spong will square off against Julian Pollard in a heavyweight title bout in the headliner of Big Knockout Boxing’s (BKB) third event on June 27 at the Mandalay Bay Events Center in Las Vegas, according to a release from the fledgling promotion. The longtime kickboxing standout has already been booked to face Mike Kyle at WSOF 22.

There will be more than just a title on the line, as Spong can earn a $30,000 bonus with a knockout, and additional $10,000 bonuses will be awarded for “Punch of the Night” and “Hardest Punch,” which is tracked by a special sensor in the fighters’ gloves called the “Hit Chip.”

“Our aim from the beginning was to feature great fighters, whether they be conventional boxers or MMA athletes, who demonstrate great boxing and striking skills. Ultimately, it is all about delivering unparalleled action in the Pit for our fans,” said BKB co-commissioner Alex Kaplan. “As for MMA athletes, they have to have consistently demonstrated boxing and striking skills in the cage. If they are strikers that excel on their feet, they are welcome in BKB.”

BKB differs from traditional boxing promotions in a number of ways. Each round lasts two minutes instead of three, and non-title fights go five rounds, while title bouts are scheduled for seven. Bouts are contested in “The Pit,” a circular arena 17 feet in diameter that has no ropes or corners. According to the BKB website, it is about half the size of a standard boxing ring.

Spong suffered a gruesome leg injury in a loss to Gohan Saki in a kickboxing contest at Glory 15 on April 12, 2014. He returned to the combat sports arena this past March, knocking out Gabor Farkas in the first round of a boxing match in Germany. The “King of the Ring” is 2-0 in WSOF, with victories over Angel DeAnda and Travis Bartlett.

BKB3 will also feature another MMA veteran, as former UFC and Strikeforce talent Chris Spang takes on Samuel Horowitz in a featured light heavyweight tilt. The five-bout main card airs on pay-per-view beginning at 10 p.m. ET and can be purchased for $29.95.