Dustin Hazelett’s return to the lightweight division was an inauspicious one, as he submitted to a Mark Bocek triangle choke at 2:33 of the first round at UFC 124 “St. Pierre vs. Koscheck 2” on Saturday at the Bell Centre in Montreal.

After scoring a quick trip takedown, Bocek (Pictured, File Photo) fought off Hazelett’s attempted rubber guard and transitioned to the mount. The Canadian then locked up a mounted triangle choke before rolling to his back and elbowing Hazelett’s head. After a brief struggle, the American Brazilian jiu-jitsu black belt was forced to submit to the Canadian.

Early in the fight, Doerksen cracked Miller with a couple of hard overhand rights, but Miller stood his ground. The AMA Fight Club standout drove hard and scored a takedown, nearly locking up a guillotine choke that called to mind Doerksen’s defeat to C.B. Dollaway at UFC 119. It was not to be, however, as Doerksen rolled and escaped the hold. Miller maintained top position throughout the round, dropping periodic punches and elbows, as Doerksen worked from the bottom.

In the second round, Miller scored another takedown, but the wily Canadian swept him immediately. Doerksen worked from Miller’s guard but was again taken down when he allowed the American to stand. Doerksen remained active from his guard, however, nearly locking up a kimura. Round three brought more of the same, as Miller earned top position and kept it, bloodying his opponent’s nose and landing steady ground-and-pound. 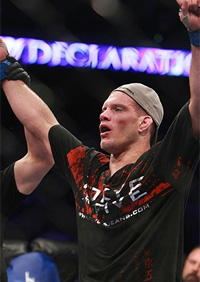 File Photo
Almeida (above) cruised to a win.

In round one, Almeida took down the Canadian with a single-leg and worked from top position, landing some ground-and-pound to end the frame. The second and third stanzas brought more of the same, with Almeida controlling the fight from top position.

“Big Dog” managed to secure the mount late in round three, capturing scores of 30-27 across the board from the judges. Almeida has won four of his last five. Grant, by contrast, owns a 2-3 mark in his last five fights.

Rafael Natal and Jesse Bongfeldt fought to a draw in a preliminary middleweight duel.

Natal, a Brazilian jiu-jitsu black belt, took the fight to the floor early in the first round and got the better of the initial grappling exchanges. Early in the second, Bongfeldt floored Natal with a left hook, but Natal recovered and managed to take Bongfeldt’s back. It was all Bongfeldt in the third round, however, as the Canadian dropped a tired Natal with a right hand and transitioned to the mount, landing ground-and-pound and controlling his opponent as the fight came to a close.

Still, neither man left the cage satisfied, as the fight was announced as a 30-30 draw on all three scorecards.

Sean Pierson defied the oddsmakers in a welterweight prelim, as he dominated favorite Matt Riddle en route to a unanimous decision in his Octagon debut.

The Canadian used his boxing to stun Riddle in the first round, eventually taking his back and digging in the hooks. Pierson used his jab effectively throughout the fight, much to the delight of the partisan crowd. Late in the fight, a game Riddle was in desperation mode, swinging for the fences but coming up short in the punching exchanges.

In the first bout of the evening, undefeated Canadian John Makdessi kept his perfect record intact with a unanimous decision victory over Pat Audinwood. Scores from the lightweight bout were 30-27, 30-27 and 30-26, all for the 5-foot-8 Makdessi.

Makdessi used an array of strikes to outclass the American standing, dropping the Team Bombsquad product in the first round with a left cross. “The Bull” hit Audinwood with a smorgasbord of kicks throughout the fight, using his legs to keep his opponent on his heels. Audinwood offered little resistance throughout the fight, misfiring on most of his strikes. This marks Audinwood’s second-consecutive defeat, as he remains winless inside the Octagon.