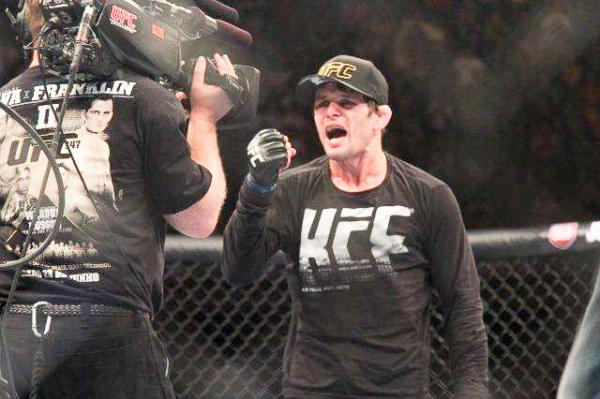 Franklin and Silva shared “Fight of the Night” honors for their five-round, 190-pound headliner, while Damm (Pictured) and Vinicius earned “Submission of the Night” and “Knockout of the Night” for their respective finishes of Anistavio Medeiros de Figueiredo and Wagner Campos.

The course of Franklin’s night changed dramatically in the second round of the evening’s main event, when “Ace” absorbed a flurry of punches and knees from the Brazilian which ended only when he caught a clubbing right hand that knocked him flat. Silva pursued the finish with all he had, but Franklin survived and subsequently rode out a unanimous decision over the fatigued “Axe Murderer” with scores of 49-46 across the board.

Damm wasted little time in taking it to his “TUF Brazil” castmate, as the 32-year-old clocked “Gasparzinho” with a hard right cross that sent Medeiros tumbling to the canvas. The former Strikeforce talent quickly took the back of his fallen foe, cinching a rear-naked choke and forcing 24-year-old Medeiros to tap out at 2:12 of the first frame.

Campos used a straight left hand and smothering top control to take the first two frames of his clash with Vinicius, but round three would belong to “Vina.” The featherweight unloaded with a barrage of punches to start the final frame, snapping Campos’ head back multiple times before referee Herb Dean saved the unsteady “Galeto” as he tried to cover up against the cage.