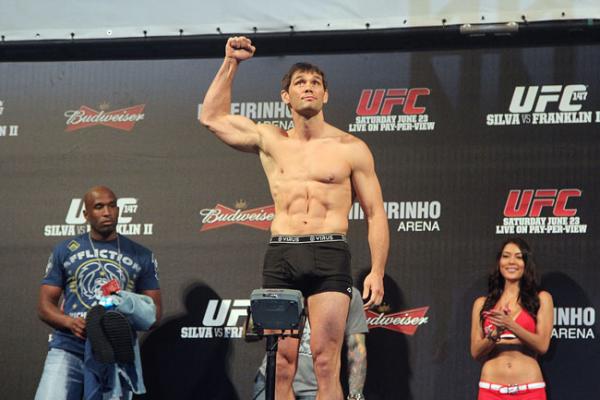 Rich Franklin was headed back down to 185 pounds when he got the call from the UFC to replace an injured Vitor Belfort in the main event of UFC 147.

The former middleweight “Ace” was slated to face Cung Le at UFC 148 on July 7. Instead, he obliged the promotion’s request and moved up his calendar by two weeks, walking into hostile territory and taking a unanimous decision against Wanderlei Silva in a190-pound catch-weight contest at Felipe Drumond Stadium in Belo Horizonte, Brazil.

The win marked Franklin’s first in-cage appearance in 18 months and his first win in two years. The Ohio native had been sidelined since injuring his shoulder last summer while preparing for a meeting with Antonio Rogerio Nogueira at UFC 133.

“There was a lot riding on this fight for me. I was coming off of shoulder surgery and a long layoff,” Franklin told Fox Sports. “I had my August fight [against Nogueira] canceled, and I was coming down to Wanderlei’s backyard. Plus, I accepted a fight that was two weeks ahead of the time frame against a completely different opponent.”

After controlling the majority of the first round, Franklin felt Silva’s punching power late in the second frame, eating a straight right hand that put him flat on his back. Though the ex-Pride champion did his best to finish, Franklin managed to protect himself long enough to hear the horn at the end of the frame.

“I don’t know [if I was out of it]. Honestly, I can’t remember. I’ll have to look at the tape,” said Franklin. “I know I got dropped. It’s not uncommon for me. It’s happened in many fights. It’s just something I’m used to working through, I guess.”

Franklin regained his legs in the third round, while Silva appeared exhausted from his attempt to end the bout. The American continually rifled out his jab, often doubling up as Silva searched for another opportunity to counter. The final two frames produced essentially the same, though Silva managed to gather the last of his strength for a rally with one minute remaining before being floored by Franklin’s last punch of the fight.

Franklin now owns a pair of victories over the “Axe Murderer,” having previously outpointed Silva at UFC 99 three years ago. After sharing 40 total minutes of combat with the former Chute Boxe fighter, Franklin says that Silva owns his respect both in and outside the cage.

“Thank God I won this fight, but guys like Wanderlei, they are so respectful and such honorable opponents. Those are the kind of guys where, if you had to pick someone to lose to, they’re the ones you wouldn’t mind losing to,” said Franklin. “I know what it feels like to fight in my backyard and lose a big fight. Anderson [Silva] did the same thing to me [at UFC 77] in Cincinnati when I rematched him for the title.”

His “Fight of the Night”-winning performance now behind him, Franklin says that he hopes to finish his career at middleweight, ideally with a belt around his waist.

“The UFC didn’t want to do a third fight between Anderson and me, and that was understandable. I lost both of those fights pretty convincingly, but enough time has passed now,” said Franklin. “I’m not going to be able to make a title run at 205 [pounds]. I’m just not big enough. So, I talked to the UFC about dropping back down to 185. If I can put some wins together, then maybe we’ll shoot for a title before I retire. I’m 37, and I’m getting up there in years.”