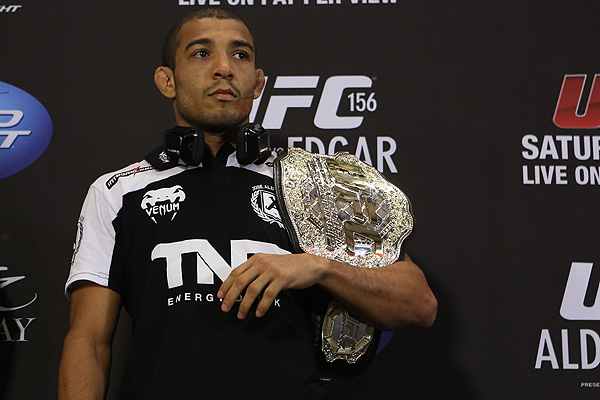 Jose Aldo retained his featherweight title at UFC 156 on Saturday night, outpointing ex-lightweight ace Frankie Edgar in their “Fight of the Night”-winning headliner.

Antonio “Bigfoot” Silva and Bobby Green were also awarded post-fight bonuses, earning “Knockout of the Night” and “Submission of the Night” honors for their respective stoppages of Alistair Overeem and Jacob Volkmann. All four men walked away from Mandalay Bay Events Center in Las Vegas with an additional $50,000 for their efforts.

Aldo used a cobra-like jab and his patented leg kicks to dominate Edgar for the first two rounds of their main event, but the ever-resilient American nonetheless began to build momentum through a competitive third stanza. The championship rounds were also hard-fought frames, though Aldo ultimately did enough to secure scores of 49-46 (twice) and 48-47 to retain his title.

Earlier in the evening’s pay-per-view broadcast, Silva looked out of sorts in the early going against Overeem. Despite appearing a step slow, however, “Bigfoot” hung tough as the former Strikeforce king dropped ground-and-pound through his guard during the second stanza. As the third round began, the Brazilian poured it on against his noticeably fatigued opponent, catching Overeem with a hard right hand before pinning him against the cage and unloading with a flurry of blows that relieved “The Demolition Man” of his consciousness.

Green showed great resolve in his undercard duel with Volkmann, who asserted his dominance in the first frame by taking Green to the mat and securing his back. The former Strikeforce talent struck back in the second and third periods, scoring takedowns of his own and landing clean ground-and-pound before cinching up a fight-ending rear-naked choke to submit Volkmann for just the third time in the Minnesotan’s 19-fight career.