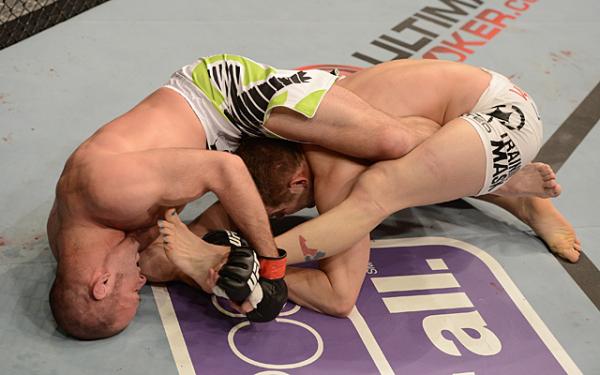 
Brendan Schaub played it as safe as one can play it against someone who hits like a truck.

Schaub took down Lavar Johnson repeatedly, threatening him with submissions and punches en route to a unanimous decision at UFC 157 “Rousey vs. Carmouche” on Saturday at the Honda Center in Anaheim, Calif. All three judges arrived at the same verdict: 30-27 for Schaub (9-3, 6-3 UFC), who threw the brakes on a two-fight losing streak.

On the heels of back-to-back knockout losses to Antonio Rodrigo Nogueira and Ben Rothwell, Schaub turned to his wrestling. He struck for multiple takedowns in all three rounds, stayed active from top position and dodged Johnson’s heavy hands during their brief standup exchanges.

Kuivanen controlled the first frame with his punching combinations and constant pressure, but he was faced with an opponent who would not be denied. Chiesa (9-0, 2-0 UFC) trapped the Fin against the cage in the second round, took his back as they scrambled to the mat and began his search for the choke. His efforts succeeded, as the blade of his forearm slipped under Kuivanen’s chin and brought the bout to a close.

“I knew the first round was the only one he could win,” Chiesa said. “The second and third rounds, even if we went to a decision, I knew I’d take it. Once I catch someone’s back, I don’t give it up until I choke you.”


“The Ultimate Fighter” Season 14 finalist Dennis Bermudez edged Matt Grice by split decision in a scintillating preliminary featherweight scrap. All three judges scored it 29-28, two of them siding with Bermudez (10-3, 3-1 UFC), who has won his last three fights.

Bermudez capitalized on a failed takedown from the decorated wrestler in the first round, moving to mount and unleashing a hellacious barrage of punches. Grice (15-5, 2-5 UFC) returned to his feet and nearly finished it with a wicked left hook. The buckled Bermudez somehow weathered the clean blow to his chin and established his foothold with heavy power punches in round two.

Round three was extraordinary. Bermudez set Grice on wobbly legs with a savage right uppercut and seemed close to forcing the stoppage on countless occasions. Grice fought back, even as he appeared out on his feet, but his valiance ultimately went for naught in an early contender for “Round of the Year.”

Stout Ekes Out Decision Over Fodor


Sam Stout leaned on accurate punching combinations, trusted takedown defense and grueling clinch work, as he earned a split decision over Strikeforce import Caros Fodor in a competitive undercard clash at 155 pounds. All three cageside judges scored it 29-28, two of them siding with Stout (19-8-1, 8-7 UFC).

Round one was the most decisive of the three, as Stout surprised the AMC Pankration export with a takedown, passed to half guard and eventually moved to mount before threatening Fodor with an armbar late in the frame. Over the final 10 minutes, the two lightweights jockeyed for position in the clinch and traded punches, knees and elbows in close quarters.

Fodor (7-3, 0-1 UFC) has suffered back-to-back defeats for the first time as a professional.


Bellator MMA veteran Kenny Robertson submitted Brock Jardine with an unconventional first-round leg lock in an undercard tilt at 170 pounds. His hamstring stretched beyond the pain threshold, Jardine (9-3, 0-2 UFC) conceded defeat 2:57 into round one.

Robertson (12-2, 1-2) dodged an attempted guillotine choke, set up shop in top position and moved to his adversary’s back. Soon after, Jardine was flattened out and desperately trying to free himself. Robertson first went for a rear-naked choke, but then, while still riding high on Jardine’s back, he reached behind him and stretched the leg for the tapout.


Airtight takedown defense, aggression in the clinch and a stinging jab carried Neil Magny to a unanimous decision over Team Link’s Jon Manley in a preliminary welterweight affair. Magny (8-1, 1-0 UFC) swept the scorecards with 30-27, 30-27 and 29-28 marks.

Quicker to the punch, Magny put his stamp on the match in the opening minutes and built on his momentum from there. The 25-year-old Miguel Torres protégé zapped Manley (7-2, 0-1 UFC) with a beautiful standing elbow and ringing right hand in the second round, closing the frame in dominating fashion, as he beat upon his turtled foe with punches and elbows against the cage.

Magny, who defended all but one of Manley’s takedown attempts, delivered one of his own in round three, eventually moved to mount and punctuated his first UFC victory with some heavy artillery from top position.


Nah-Shon Burrell won for the seventh time in eight fights, as he captured a unanimous decision from fellow Strikeforce import Yuri Villefort in an undercard battle at 170 pounds. All three cageside judges cast their scorecards in favor of Burrell (9-2, 1-0 UFC): 30-27, 29-28 and 29-28.

The second-youngest fighter on the UFC roster, Villefort (6-2, 0-1 UFC) saw his best chance at victory come and go in the first round. There, he struck for a takedown, moved to the Philadelphia native’s back and threatened to close the deal with a rear-naked choke. Burrell, who failed to make weight for the bout, freed himself from the 21-year-old Brazilian’s clutches and ultimately returned to the safety of his feet.

Burrell answered Villefort’s takedown and submission attempts in rounds two and three with effective counter punching and heavy ground-and-pound. During one exchange, he belted the Blackzilians prospect with roughly a dozen punches to the face and head while Villefort searched in vain for a heel hook, leaving himself exposed.