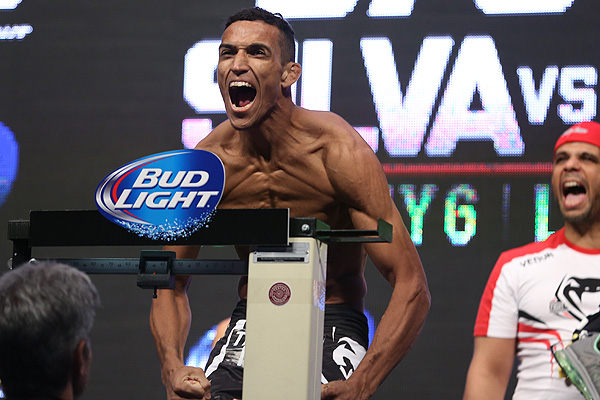 After coming up short in a “Fight of the NIght” winning performance against Frankie Edgar in the UFC 162 co-headliner, Charles Oliveira will attempt to get back in the win column against Estevan Payan.

Promotion officials announced on Thursday that the featherweight pairing will go down at UFC 166. The Oct. 19 card, which takes place at the Toyota Center in Houston, features a heavyweight title tilt between Cain Velasquez and Junior dos Santos.

A former lightweight, Oliveira has lost his last two bouts at 145 pounds, falling to Cub Swanson via first-round knockout at UFC 152 before dropping a unanimous verdict to Edgar in July. “Do Bronx” defeated Eric Wisely and Jonathan Brookins in his first two featherweight appearances.

A two-time Strikeforce veteran, Payan lost to Jeremy Stephens in his Octagon debut, losing a bloody unanimous decision at UFC 160. That setback ended an eight-fight unbeaten streak for the Arizona Combat Sports product.