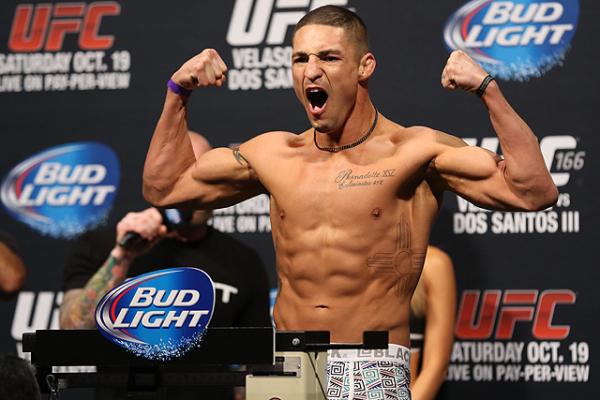 Diego Sanchez is 1-1 since returning to lightweight earlier this year. | Dave Mandel/Sherdog.com

The lightweight showdown joins a March 15 bill that is headlined by a light heavyweight clash between Jon Jones and Glover Teixeira. The event takes place at the American Airlines Arena in Dallas and will also see Alex Garcia collide with Sean Spencer in a welterweight duel of up-and-comers.

Sanchez, 31, has gone 1-1 since returning to lightweight earlier this year, scoring a controversial split decision victory over Takanori Gomi before falling to Gilbert Melendez in a potential “Fight of the Year” nominee at UFC 166.

Jury, meanwhile, has never been beaten as a pro, racking up a 4-0 Octagon record following his time on “TUF 15.” The 25-year-old was last seen on Sept. 21, when he scored a split decision victory over “TUF 16” finalist Mike Ricci at UFC 165.

Though Spencer stumbled in his short-notice Octagon debut against middleweight Rafael Natal, “Black Magic” has since won two straight bouts at 170 pounds, outpointing Yuri Villefort in September before doing the same thing against Drew Dober last month at “The Ultimate Fighter 18” finale.