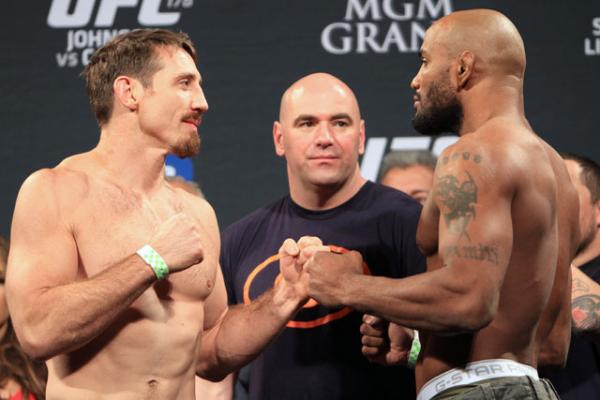 Tim Kennedy and Yoel Romero had the “Fight of the Night” at UFC 178. | Photo: Jeff Sherwood/Sherdog.com


Conor McGregor banked a second consecutive $50,000 “Performance of the Night” for his first-round technical knockout victory at UFC 178 on Saturday night in Las Vegas.

After a heated build-up to his pay-per-view bout with Dustin Poirier, “Notorious” was able deliver what he promised: a finish of his opponent. Now, McGregor moves into a position where his next fight could very well be to determine whether he is the No. 1 contender for the 145-pound title.

After a well-documented layoff following a plethora of injuries, Dominick Cruz returned to the Octagon in style, finishing Takeya Mizugaki in a mere 61 seconds to capture a $50,000 “Performance of the Night” bonus. Cruz looks ahead to a shot at T.J. Dillashaw’s title, a belt Cruz never actually lost.

The action during Tim Kennedy and Yoel Romero’s bout was overshadowed by the highly controversial nature of the matchup, but in the end, the UFC acknowledged the efforts of both men and awarded the middleweights $50,000 “Fight of the Night” bonuses. The fighters each had their moments during the bout, but the “Soldier of God” was able to finish Kennedy after a series of brutal punches on the ground.