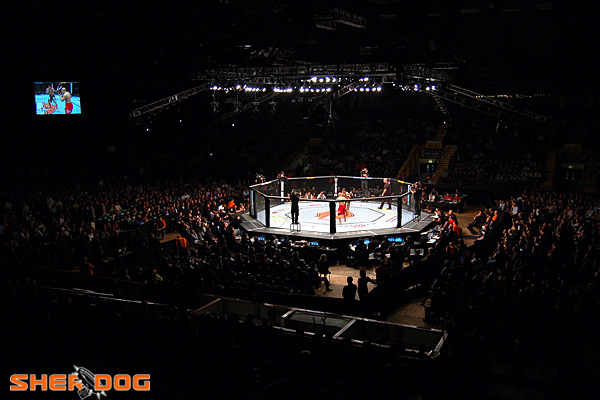 
It seems the Ultimate Fighting Championship is tired of waiting for mixed martial arts to be legalized in New York.

The Las Vegas-based fight promoter Monday announced that UFC will hold an event at New York City’s famed Madison Square Garden on April 23, 2016. The announcement is a clear shot across the bow to New York legislators as the UFC fights to lift the state’s long-standing ban on professional MMA.

No further details were announced regarding the event, which the UFC acknowledged may have to be canceled.

“Later this week, UFC will ask a federal judge to issue a preliminary injunction against New York state officials enforcing its unconstitutional law,” the company stated in a release. “Without such an injunction, the event at Madison Square Garden will not be able to proceed.”

The announcement comes in the same month as the 20th anniversary of UFC’s last event in New York, UFC 7, which took place in Buffalo on Sept. 8, 1995.

“We believe fight fans have waited long enough to experience live UFC events in the state of New York and we are thrilled to announce our first event at Madison Square Garden,” UFC Senior Executive Vice President and Chief Operating Officer Lawrence Epstein stated in a release. “Professional MMA is legal around of the world and it is about time New York followed suit.”

In June, a bill to legalize MMA died before it could reach the state assembly, marking the eighth straight year such a bill failed to receive an assembly vote.

Last month, UFC filed an appeal with the United States Court of Appeals for the Second Circuit which seeks to overturn New York’s MMA ban on the grounds that it violates the First Amendment rights of both fighters and fans. UFC officials today also announced that a separate appeal was filed Monday in federal court on similar grounds, stating that “this out-of-date law is too unclear for the public to understand.”