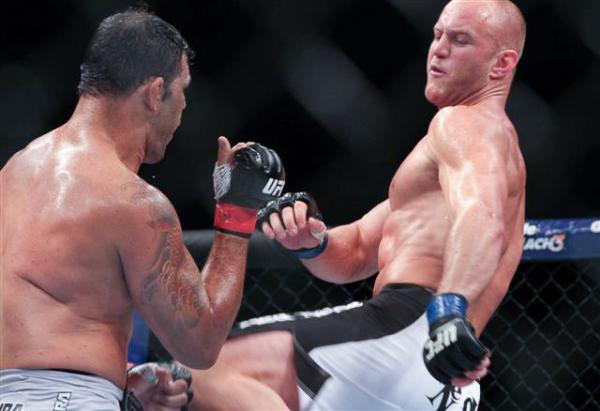 The 28-year-old must also complete an approved drug rehabilitation program and produce a clean test before he is allowed to compete again in the Octagon, Sherdog.com confirmed Thursday evening with UFC executive Marc Ratner.

Herman, 28, was flagged for marijuana metabolites following a second-round submission defeat to Antonio Rodrigo Nogueira at the Oct. 13 event in Rio de Janeiro. As Brazil does not have an athletic commission to oversee MMA events, the UFC acted as its own regulatory body.

UFC 153 main eventer and recent light heavyweight retiree Stephan Bonnar was also caught using a banned substance, testing positive for Drostanolone, an anabolic steroid. “The American Psycho” was suspended for one year. Both Herman and Bonnar admitted to using the respective substances, according to an official release from the UFC.

The positive tests represent the second time this has happened to both fighters. Herman was previously prevented from competing last year at UFC 136 when a pre-fight drug test was flagged for marijuana by the Texas Department of Licensing and Regulation. In 2006, Bonnar was suspended for nine months by the Nevada Athletic Commission after testing positive for Boldenone, another anabolic steroid, at UFC 62.

Herman has lost three straight fights, kicking off 2012 with a February defeat to lanky Dutchman Stefan Struve before suffering a 51-second knockout at the hands of the hard-hitting Roy Nelson three months later at UFC 146. Herman’s October defeat to Nogueira marked the first submission loss of his career and his fifth overall setback since turning pro in 2006. The heavyweight has gone the distance just one in his 26-fight career and owns 15 wins by way of knockout.