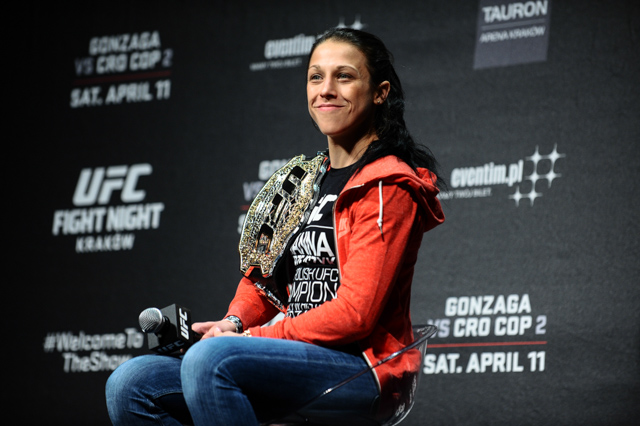 
Joanna Jedrzejczyk kept dishing out the punishment, but Jessica Penne did an admirable job of hanging around for as long as she possibly could.

The strawweights each earned a $50,000 “Fight of the Night” bonus for their work in Saturday’s headliner at O2 World in Berlin, a bout which Jedrzejczyk won via technical knockout in the third frame. The Polish star retained her 115-pound strap by battering Penne with wicked combinations throughout their UFC Fight Night contest. A bloodied Penne did her best to get her foe to the canvas, but ultimately Jedrzejczyk’s takedown defense held up, as the bout was halted 4:22 into the period.

Elsewhere, Mairbek Taisumov collected a $50,000 “Performance of the Night” check for his second-round stoppage of Alan Patrick Silva Alves in a lightweight scrap. Taisumov sprawled on a takedown attempt and quickly followed with a high kick that knocked Alves to the canvas. From there, Taisumov unloaded with standing-to-ground punches until the fight was halted at the 1:30 mark of round two.

Meanwhile, Octagon newcomer Arnold Allen garnered the evening’s other $50,000 performance award for his submission of Alan Omer in their preliminary featherweight encounter. It was a closely contested bout until Allen snatched his foe’s neck seemingly out of nowhere with a tight guillotine choke to secure the tapout 1:41 into round three.