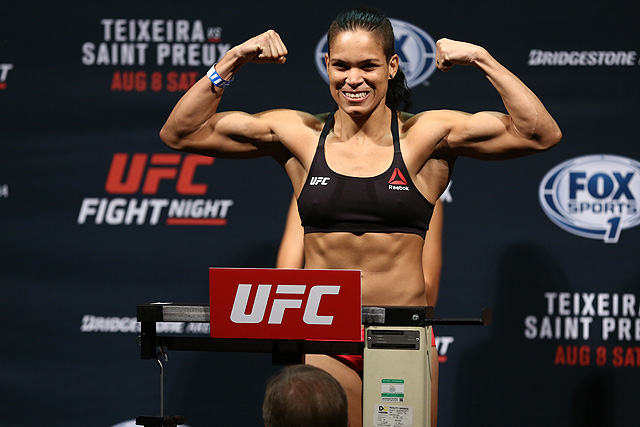 Amanda Nunes was rewarded for a strong showing at 135 pounds. | Photo: Dave Mandel/Sherdog.com

Light heavyweights Teixeira and St. Preux capped the evening with a terrific battle which saw former title challenger Teixeira prove he is still a force to be reckoned with at 205 pounds.


Advertisement
Teixeira took “OSP” down repeatedly, but former University of Tennessee football player St. Preux battled hard and exploded to his feet every chance he could. The more experienced Teixeira used a tremendous amount of pressure, eventually pushing St. Preux to the point of exhaustion. After securing mount and cutting up his opponent, Teixeira cinched a rear-naked choke and put “OSP” to sleep at 3:10 of round three. The back-and-forth tilt earned “Fight of the Night” honors for Teixeira and St. Preux.

Surging women’s bantamweight contender Nunes looked sensational against former title challenger Sara McMann. The Brazilian tore into the former Olympic wrestler and, after dropping McMann to her knees with a blistering combo of punches, Nunes applied a rear-naked choke to win via submission at 2:53 of round one. The decisive victory gave Nunes one of two “Performance of the Night” bonuses.

The other “Performance” bonus went to bantamweight Vera, who dominated Roman Salazar from the start and eventually landed a textbook armbar after transitioning from the triangle in the second. The end came at 2:15 of the second round.