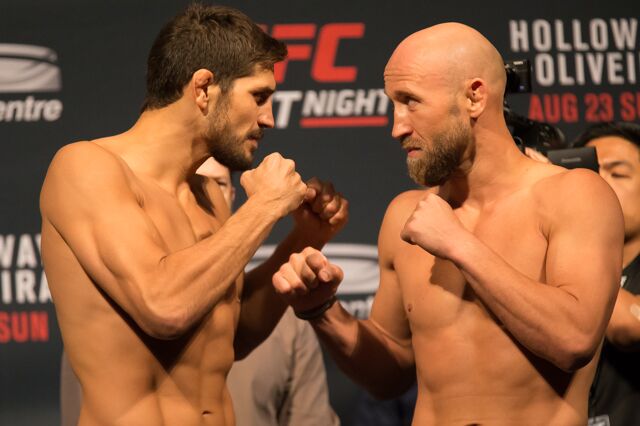 Patrick Cote and Josh Burkman slugged it out in Sunday’s “Fight of the Night.” | Photo: Josh Schaefer/Sherdog.com

Cote and Burkman were a lock for “Fight of the Night” honors after their back-and-forth welterweight scrap inside Sasktel Centre. The longtime UFC veterans tore into one another from the opening bell, and both combatants were rocked badly during the brawl. Burkman was the first to have his equilibrium skewed at the end of the first, but “The People’s Warrior” hanged tough and survived to hear the horn.

Burkman turned the tides in the second when he buckled the knees of “The Predator,” but like his American counterpart, Cote was able to fend off the attrition and clear his head. Each gave as good as he got, but eventually, Cote’s raw punching power proved to be too much for Burkman to handle. A massive right hand exploded on Burkman’s face, dropping him onto his back, and Cote pounded him out moments later.

Newly minted bantamweight Arantes rebounded from a loss in his last outing with a dazzling armbar submission of Yves Jabouin late in round one. After being taken down by the Montreal-based fighter, Arantes exploded out during a scramble and locked up an arm, forcing the tap to earn one of two $50,000 “Performance of the Night” awards.

Perez scored highlight reel knockout of veteran bomber Sam Stout in just 54 seconds. He leveled the Canadian with a booming right hand and then flooded Stout with strikes until the fight was stopped, marking the biggest win of Perez’s career. The 26-year-old New Jerseyan was given a “Performance of the Night” bonus for his showing, after which he announced his retirement from MMA.