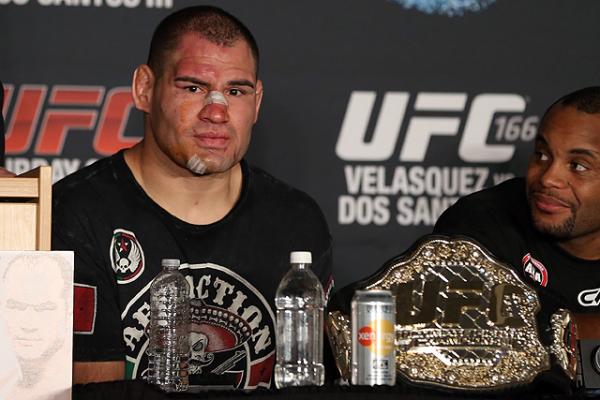 Cain Velasquez could be sidelined until late 2014. | Dave Mandel/Sherdog.com


UFC heavyweight champion Cain Velasquez announced this week that he underwent successful shoulder surgery, tweeting a post-operative picture of himself on Wednesday.

“My shoulder surgery yesterday went well,” Velasquez wrote. “Can't wait to be back at it!”

Velasquez had the labrum in his left shoulder repaired, according to Wednesday night’s report on “UFC Tonight,” which also speculated that the champ could be sidelined until late 2014.

The American Kickboxing Academy standout injured the shoulder during his one-sided rubber match with Junior dos Santos this past October. The UFC 166 confrontation saw the champion dominate “Cigano” for more than 23 minutes, inflicting continual damage on the challenger before scoring a fifth-round technical knockout.

Velasquez previously injured his other shoulder in 2010, when he tore his right rotator cuff during a title-winning performance against Brock Lesnar. That injury kept Velasquez out of action for more than a year and preceded the champion’s lone career defeat, when he was knocked out by dos Santos in his November 2011 return. The 31-year-old rebounded from that setback to earn four straight wins, however, scoring a pair of wins over both Antonio Silva and dos Santos to reclaim the top spot in the heavyweight division.