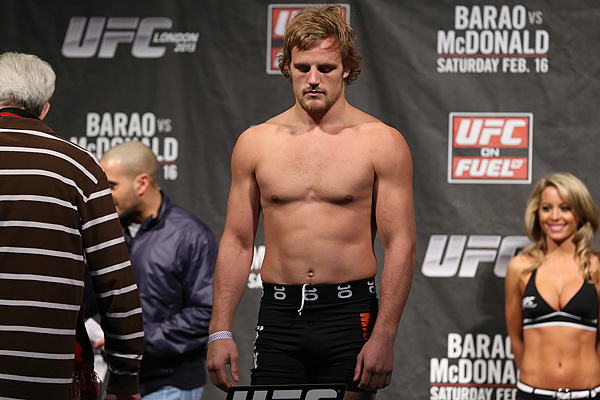 Gunnar Nelson returns to the Octagon on March 15. | Dave Mandel/Sherdog.com


Two new contests have been added to the UFC’s upcoming return to London.<, including a welterweight match pitting Gunnar Nelson against Omari Akhmedov.

UFC officials announced the booking on Tuesday, also revealing that a 170-pound showdown between Igor Araujo and Danny Mitchell will go down at the March 8 event, which takes place at the O2 Arena.

Nelson is known for his skill on the mat and has never been beaten as a pro, racking up wins over DaMarques Johnson and Jorge Santiago to begin his UFC career. Akhmedov, meanwhile, has not lost in three years and knocked out Thiago de Oliveira Perpetuo in a wild UFC debut last month.

A veteran of 31 pro outings, Araujo has won 13 of his last 14 bouts and capped the run with a unanimous decision victory over Ildemar Alcantara this past October at UFC Fight Night 29. In Mitchell, Araujo faces a 27-year-old British vet who rides back-to-back victories into his Octagon debut.