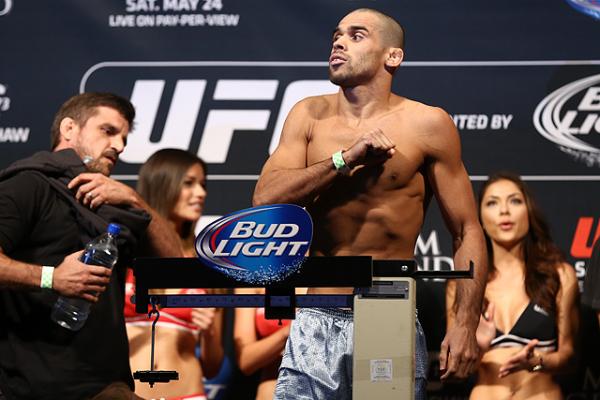 Renan Barao will not get a rematch with T.J. Dillashaw upon his return. | Dave Mandel/Sherdog.com


When Renan Barao withdrew from his main event bout with T.J. Dillashaw at UFC 177, he gave up his right to an immediate rematch for the bantamweight title.

“You [Barao] have enough money to get a nutritionist and do it right,” White told reporters.

According to an earlier report, Barao passed out while cutting weight on Friday and was taken to a Sacramento hospital. Following the mishap, the Brazilian did not show up for licensing or medicals with the California State Athletic Commission.

In an interview with UFC.com following the weigh-ins, White elaborated on what he knew regarding Barao’s withdrawal.

“Barao was cutting weight, and I only heard from the doctor that he fainted and his team called an ambulance. They came and got him and took him to the hospital,” White said. “From what I heard he is doing good. He was too dehydrated; I think the lowest he got was 138 and couldn’t make it. As you continue getting older, maybe it’s time for him to go up to 145. He probably can’t make the weight anymore, I don’t know.”

The next time Barao does set foot inside the Octagon will be the first fight since 2012 where the UFC bantamweight title has not been on the line.