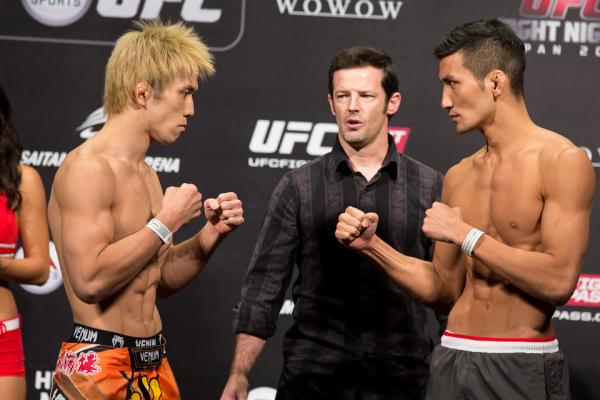 Michinori Tanaka (left) has been stripped of his “Fight of the Night” bonus. | Photo: Taro Irei/Sherdog.com


Ultimate Fighting Championship on Tuesday announced that bantamweight Michinori Tanaka failed a drug test for two banned substances prior to his bout against Kyung Ho Kang at UFC Fight Night “Hunt vs. Nelson” in September.

Tanaka tested positive for ephedrine and pseudoephedrine, both of which are banned in World Anti-Doping Agency-regulated competition. Tanaka lost his bout via split decision, and the Japanese prospect has been forced to return his $50,000 “Fight of the Night” bonus.

“Accepting the accuracy of the test result, Tanaka has admitted to taking over-the-counter allergy medication prior to the fight, likely causing the positive result, and acknowledges the illegal substances were in his system,” the UFC stated in a release. “Consequently, Tanaka agreed to a nine-month suspension from unarmed combat competition.”

After the suspension, the 24-year-old will be required to pass a drug test to resume competition.