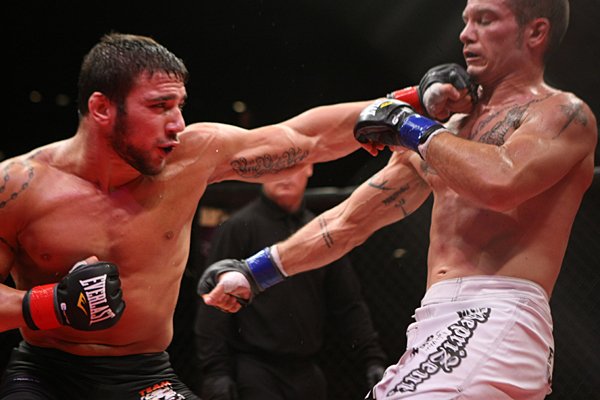 Rivera [pictured] was given a very game challenger in Joel Roberts, as his opponent looked to fight the bout in a phone booth. Grappling for the better part of three rounds, Rivera retained his strap via unanimous decision with scorecards of 30-27, 30-27 and 29-28. The final tally didn’t indicate just how close the fight was.

“He was trying to get me down,” Rivera told Sherdog.com after the fight. “He was trying to grapple me the whole time. I was just not letting him turn it in. I wanted to beat him up against the cage, take his legs away and get him a little tired. I noticed when he started getting tired, but I didn’t trust my hands enough.”

At light heavyweight, Team Serra Longo’s Ed Gordon was a champ with all sorts of hype behind him. The latest challenger to try and derail the prospect was Anton Talamantes. Where others failed before him, Talamantes succeeded thanks to a strong wrestling game. Taking Gordon down in each of the three rounds was enough to earn Talamantes the light heavyweight strap via unanimous decision (29-28, 29-28, 29-28).

“When I watched the tape on Ed Gordon he was a predominantly a standup fighter,” said Rico Talamantes, Anton’s brother and cornerman. “That’s it. He had some counter wrestling, but with my brother’s wrestling I knew he’d take him down. Once he gets on top he’s very hard to get up from.”

“I think this is a great fight if you’re going to lose,” Longo said. “He didn’t get beat up. Now he knows the ref could keep you down there longer. There are a million things to work. If the ref would’ve stood that fight up more I think he would’ve had a different fight. So I think a loss like that is easier to grow from.” Keith Mills
Taurosevicius stayed cool.
Mike Santiago gave Deividas Taurosevicius all he could handle in their featherweight title fight, as the champion Taurosevicius had to fend off a triangle attempt late in the second round. After successfully defending the attempt, a subsequent scramble between the fighters saw Taurosevicius force Santiago to tap with an armbar at 3:50 in the second to retain his title.

The Ring of Combat regional middleweight strap was also on the line in a bout pitting Ronald Stallings against Mike Massenzio. The last bout on the card ended quickly after a knee to the body from Stallings crumpled Massenzio. The Team Lloyd Irvin product followed up with some unanswered strikes, forcing referee Dan Miragliotta to stop the bout at 4:03 into the opening round.

There was only one heavyweight bout on the card, as former New York Pitbull Jamal Patterson took on Chris Sutton. A bout during which neither man seemed to have a definitive upper hand ultimately turned in a definitive result. Patterson’s debut in a Ring of Combat cage was a successful one as he took a unanimous decision over Sutton (30-27, 30-27, 30-27).

Long Island MMA’s Chris Wade had to survive an early blitz from Alfred Walker. Not only did Wade survive, but he quickly parlayed it into strong positioning to latch on a guillotine choke and put Walker to sleep just 59 seconds into the opening round. Keith Mills
Stallings crushed UFC vet Massenzio
with a knee to the body.
“The Rabid Wolverine” Shane Crenshaw lived up to his nickname against Tom English in another featherweight bout on the card. Crenshaw’s relentless pressure ground English down over the course of three rounds, giving him the unanimous decision (29-28, 29-28, 29-28).

Mike Prokop overwhelmed Will Metts for a majority of their catch-weight bout, connecting seemingly at will on the feet. Supplementing his striking game with a strong wrestling game, Prokop was in control going into the third. An accidental foul sent the bout to the judges’ scorecards early, but Prokop had already done more than enough to win a unanimous decision (30-27, 29-28, 29-28).

In featherweight action, Anthony Facchini moved to 3-1 after an impressive performance against Soslan Abanokov. After a back-and-forth opening round, Facchini scored the win at 3:20 in the second round with a reverse triangle.