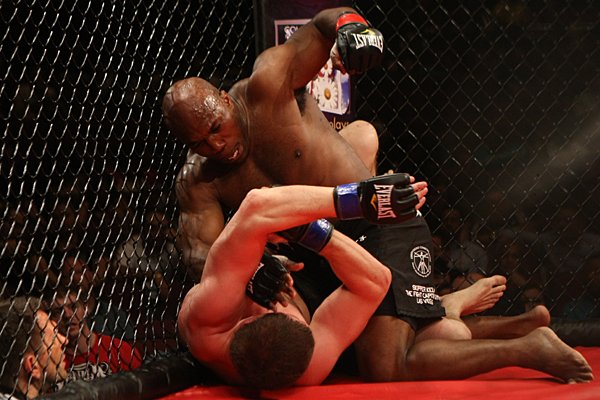 The main event of Ring of Combat 40 was originally scheduled to feature Tom DeBlass, but the light heavyweight heeded the call from the UFC for its show in Sweden on April 14.

In his spot stepped UFC veteran Marvin Eastman, who took on Dmitry Zabolotny at the Tropicana Hotel and Casino in Atlantic City, New Jersey on Friday night.

Eastman attacked Zabolotny over the course of their three-round battle, however, he struggled at times with his taller and lankier opponent as they exchanged dominant positions on the mat. “The Beastman” was the more active of the two fighters over the course of the three rounds and did more damage to his Russian counterpart. It was Eastman’s offense that earned the 40 year old the unanimous decision (30-27, 29-28 and 29-28).

Gordon showcased his standup more than he had in any of his previous bouts. He struck gold 2:08 into the opening round as a right hand found its way through. Gordon put Contaldi down with that right, ending the fight and keeping his undefeated mark intact.

“MMA has a lot of different aspects to it, and every fight you want to learn something from it,” Gordon told Sherdog.com. “Luckily enough I’m undefeated and even in those wins I learned from it. No matter if you win or not you still have things you can to work on.” Keith Mills
Gordon rolled past Contaldi.
It’s not an issue of if Team Tiger Schulmann will have a representative on a New Jersey card but who it will be. For this incarnation of Ring of Combat it was Carlos Brooks, as he took on veteran light heavyweight Danny Babcock. Brooks moved in and out of the pocket on Babcock quickly and eventually connected with a right 45 seconds into the opening round that put Babcock down for the win.

The knockout of the night honors were decided with three bouts left on the card thanks to middleweight Daniel Akinyemi. A mere 12 seconds into his bout with Brett Linebarger, Akinyemi threw a sharp right hand and down Linebarger went. The rest was academic as referee Dan Miragliotta stepped in to stop the bout, giving Akinyemi the win.

Stephen Govan and Christopher Wing spent the better part of their three rounds fighting in close quarters. Both Govan and Wing had their moments coming forward and scoring with offense, but neither side scored with anything definitive. Sherdog.com scored the bout 29-28 in favor of the AMA welterweight Wing. Ultimately Govan was awarded a split-decision victory on the judges’ scorecards (30-28, 29-28, 28-29).

In a tussle between regional MMA show veterans, Ryan Vaccaro went into the third round against Billy Vaughan up two rounds to none. The Pellegrino MMA featherweight had to survive the third but did enough to win a unanimous decision. (29-28, 29-28, 29-28) K. Mills
Brooks blew up Babcock in
just 45 seconds.
The first stoppage on the card came courtesy of Yusuf Yoldas against Adam Fearon. The Eagle MMA fighter caught Fearon early in the second frame to force referee Kevin Mulhall to stop the bout 46 seconds into the round.

Despite having to fend off a guillotine choke submission attempt for almost half the opening stanza, Mervin Rodriguez walked away with a unanimous decision over Nabih Barakat in a matchup of Pellegrino MMA and Team Serra Longo representatives.

Michael Andrillo did his best to thwart any offense from the bigger Walter Howard in their light heavyweight bout, but Andrillo couldn’t do enough to hold off “The Iron Butcher” from the Ironbound Fight Club. Howard took a unanimous decision in his pro debut.

Long Island’s Chris Wade put Maykon Santos down early and often in their bout at lightweight. Santos, a Newark, N.J., native, forced Wade to defend submissions while in his guard throughout the fight. It wasn’t enough, as Wade took home a unanimous decision [20-19, 20-18, 20-18].