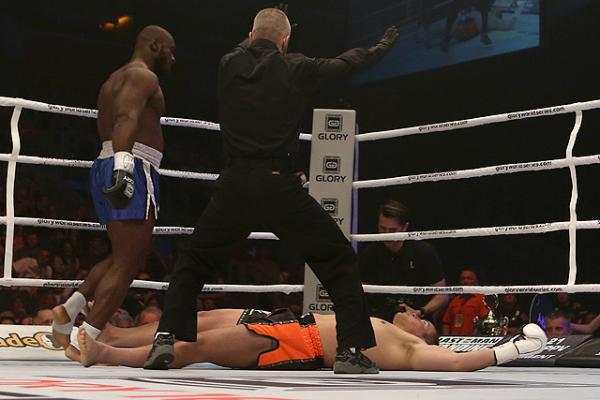 Zack Mwekassa blew away UFC vet Pat Barry in the first round at Glory 16. | Dave Mandel/Sherdog.com


Zack Mwekassa spoiled Pat Barry’s Glory World Series debut, knocking out the UFC veteran with a left uppercut 2:33 into the opening frame of their heavyweight encounter at the 1stBank Center in Broomfield, Colo., on Saturday night.

Throughout his Octagon tenure, Barry was accustomed to being the shorter, lighter fighter. That was not the case at Glory 16, but despite the size disadvantage, the smaller Mwekassa packed a powerful punch. The Congo native displayed superior hands throughout the fight, first dropping “HD” to a knee after a series of blows early in the round.

Then, just moments after receiving a standing eight-count from referee Tom Johnson, Barry night’s came to an abrupt end, as Mwekassa connected with a brutal uppercut that momentarily lifted the Louisianan off the floor before sending him crashing to the canvas.

Barry started quickly, landing a right high kick before swarming on the pro boxer. That moment was fleeting, however, as it didn’t take long for Mwekassa to establish his superior hands. While Barry would have some success landing his trademark leg kicks, the most significant strikes of the bout came from Mwekassa’s fists.

Barry, who recently took an indefinite leave from mixed martial arts following a 5-7 stint with the UFC, was competing in the professional kickboxing arena for just the second time since 2007. Barry defeated Ed Burris via KO in a tune-up bout in March.

The Belgian was at his best in the opening stanza, as he kept Karapetyan on the defensive by blending punching combinations with whipping low kicks. That approach -- along with the occasional knee -- continued early in the second frame but tailed off as the bout progressed.

As De Bonte’s output slowed, Karapetyan began to have more success landing combinations of his own while moving in and out of danger. However, neither fighter did much to distinguish himself in the middle rounds, and the lack of action drew boos from those in attendance. Karapetyan picked up the pace in the final round. The Armenian turned up the pressure and was the clear aggressor over the course of the last three minutes, but in the end it wasn’t enough to sway the scorecards in his favor. “I think I did the most damage through the first four rounds,” de Bonte said. “I hurt his leg; I took the initiative.” 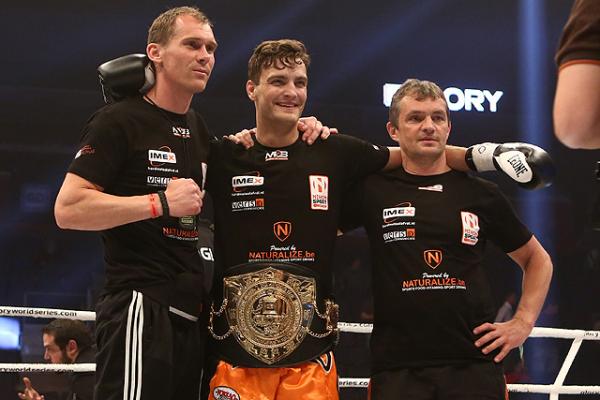 Photo: D. Mandel/Sherdog.com
Belgium's Marc de Bonte became Glory's first
welterweight champion in Colorado.
Earlier, a decidedly fresher Errol Zimmerman made short work of Anderson “Braddock” Silva in the finals of Glory’s one-night, four-man heavyweight tournament, winning via technical knockout after dropping his opponent for a third time at the 2:30 mark of the opening frame. Zimmerman will receive a shot at the promotion’s heavyweight title at a later date.

While Zimmerman also won his semifinal matchup inside of a round, Silva needed a full three rounds to advance to the final – and it showed. Zimmerman dictated the tempo from the outset, first dropping his foe with a right knee against the ropes.

A second knockdown ensued following a furious seven-punch barrage, and “The Bone Crusher” clinched his victory by sending Silva to the floor for a final time with a knee to the body followed by a right hook.

Zimmerman advanced to the heavyweight final with a first-round stoppage of Australia’s Ben Edwards. The Netherlands-based fighter initially hurt Edwards with a knee to the midsection and then polished him off with a pair of right hooks, forcing referee Al Wichgers to wave off the contest at the 2:50 mark.

Edwards began the bout as the aggressor, tagging Zimmerman with solid right hands in the early going. He appeared to have Zimmerman reeling against the ropes as he teed off with heavy punches, but the veteran covered up against the flurry and countered to floor Edwards with a right hook-uppercut combination. Edwards shook off the knockdown and continued to wade forward with punches. However, Zimmerman began to have success landing close quarters knees, the last of which set up the second – and fight ending – knockdown.

Silva, meanwhile, punched his ticket to the heavyweight final by starting quickly and then holding on down the stretch to capture a unanimous verdict over Pride Fighting Championships veteran Sergei Kharitonov. All three ringside judges scored the bout 29-27 in favor of the Brazilian.

“Braddock” set the tone in the first round, as he utilized a speed advantage to punish his foe with hooks, uppercuts and a variety of kicks. Silva scored the bout’s lone knockdown with an uppercut and also opened a cut on the top of his opponent’s head with a kick.

Kharitonov stayed in the fight and gradually increased his output over the final two rounds. As Silva’s pace slowed, the Russian kept the pressure on, bullying his foe with punches and the occasional knee. The Pride veteran’s most impressive moment came in the third stanza, when he trapped Silva against the ropes and unloaded with a series of uppercuts. However, the late salvo would not be enough.