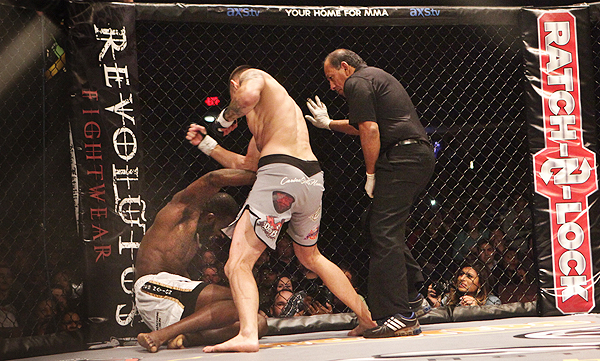 
Tim Means is fighting like a man on a mission.

The New Mexican welterweight continued his surge in the Legacy Fighting Championship 27 main event, stopping Artenas Young just 1:38 into the first round at the Arena Theatre in Houston on Friday night. “The Dirty Bird” has now earned back-to-back first-round knockouts after being released by the UFC this past summer. Means was 2-2 with the Las Vegas-based promotion.

Means (20-5-1) patiently stalked his opponent in the bout’s opening moments, picking his spots and gradually cutting off Young’s route of escape. The FIT-NHB representative countered a right hand with a knee to the chin, and suddenly the end was in sight. Means wasted little time in flurrying on his stunned adversary, landing somewhere in the neighborhood of 10 unanswered strikes before referee Joe Soliz intervened to halt the bout.

Young (10-7) was clearly unhappy with the stoppage, as he stood in the cage with his arms outstretched. However, he appeared to have had some difficulty returning to his feet immediately after Means’ assault concluded.

“I was worked up a little bit at the weigh-ins yesterday, I felt like he touched my face and we got into it a little bit,” Means said. “But Artenas is a nice guy. I’m happy to come in here and stop him.”

Henry Cejudo relied on his wrestling to cruise to a unanimous verdict over Elias Garcia in the evening’s co-headliner. All three judges scored the 125-pound fight 30-27 in favor of the 2008 Olympic gold medalist. Cejudo improves to 6-0 with the win, while Garcia falls to 4-1.

Garcia had one fleeting moment of glory before the heavily-favored Cejudo took control, as he buzzed the Olympian with a hard right hand early in the first round. However, when Garcia rushed forward to capitalize, Cejudo quickly regained his senses and landed a takedown -- the first of four times he would ground his opponent in the opening frame.

“I saw stars; I’m still kind of seeing stars,” Cejudo said during a post-fight interview. “He hit me good. I had to go back and rely on my wrestling because being dazed like that could have cost me the fight.”

From there, Cejudo was absolutely suffocating. He maintained top position for the majority of round two, landing measured elbows and a vicious knee to the body. He closed out the period by taking Garcia’s back and suplexing his man to the mat.

Round three brought more of the same, as Garcia clearly had no answers for the Arizonan’s quickness, movement and athleticism. Cejudo mounted Garcia once again before punctuating the victory with a final, emphatic slam.

It wasn’t all positive for the flyweight prospect: Cejudo was fined half his purse and will be suspended by the Texas Department of Licensing and Regulation for arriving late to Thursday’s weigh-ins and tipping the scales at 128.5 pounds.

Earlier, Larry Crowe outwrestled Terrance Ferguson to take a unanimous verdict (30-27, 29-28, 30-27) in a 190-pound catch-weight affair. Crowe began the matchup with his hands held low, throwing punches with murderous intent. Ferguson (2-2) was able to mount the Houston native twice in the opening stanza, however, perhaps prompting Crowe to change his approach. Both fighters fatigued down the stretch, but it was Crowe (8-3) who was able to land more takedowns and control the majority of the battles for position on the mat over the course of the last two rounds.

Alex Black (6-3) let Charles Cheeks III off the hook once, but he wasn’t about to make the same mistake again. After nearly ending the featherweight bout with a triangle choke in the opening frame, the 4oz. Fight Club member made good on his second chance, tapping out Cheeks (7-3) with the same maneuver 1:33 into the second stanza. The powerfully-built Cheeks spent much of the fight attempting to navigate his opponent’s dangerous guard and ultimately paid the price for his efforts.

Caio Machado survived an opening-round onslaught from Domingo Pilarte to take a unanimous verdict in a featured bantamweight contest. All three cageside judges scored the bout 29-28. Pilarte (3-1) swarmed early, attacking his foe with power punches against the cage. He was unable to stop Machado (4-0), however, and appeared to tire significantly down the stretch as the Brazilian took control with ground-and-pound and submission attempts over the final 10 minutes.

Blackzilians representative Kamarudeen Usman earned the third first-round stoppage of his young professional career to kick off the evening’s main card, as he pounded out Houston-based Steven Rodriguez 1:31 into the opening frame. Usman (3-1) dropped Rodriguez (2-2) with a left hook early, then eventually took his opponent’s back and hammered away with a series of unanswered right hands to bring the welterweight bout to a close.

In preliminary action: Rashid Abdullah earned a technical knockout win over Charlie Ontiveros at the 1:05 mark of round three due to injury; Jeremy Mahon submitted James Gonzalez with a triangle choke 1:31 into round three; Trevin Giles used an inverted triangle choke to tap Angelus Raymond McFarlane in 65 seconds; Aaron Reeves outpointed Julius Holmes; and John Gorrell took a unanimous verdict over John Hayden.