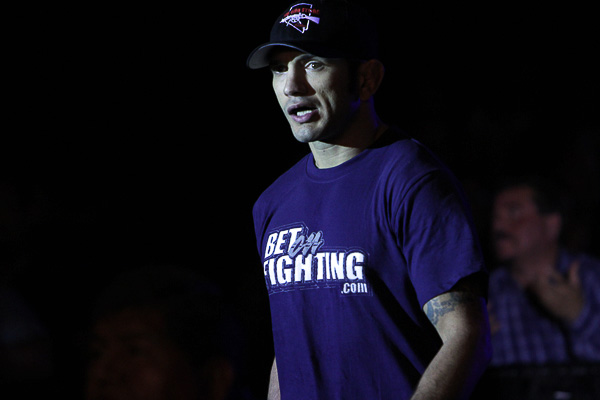 It is only fitting that a card marked by late replacements, mild upsets and injuries feature all three in its headliner. Saturday night at ShoFight 20, John Gunderson needed less than three minutes to hit the trifecta by locking up a first-round submission upset of fellow UFC veteran Karo Parisyan in front of a scattered crowd inside the O'Reilly Family Event Center on the campus of Drury University in Springfield, Mo., to take the promotion’s vacant 170-pound title.

The Xtreme Couture representative was on his back early courtesy of “The Heat,” but after working to his feet, he was able to connect with a powerful left knee that cracked an oncoming Parisyan square in the eye socket. A desperate Parisyan immediately shot for a takedown, only to be snared in a guillotine. Perhaps emboldened by his recent training with new jiu-jitsu coach Fredson Paixao, the Texas native jumped confidently guard and forced the tap just 2:47 into the bout.

“The knee is what set up the guillotine. I got sloppy; he got me in some pretty s----- positions right off the bat,” Gunderson said post-fight. “But I felt like I had him when he stuck his head in there, and I went for it … I felt it go right into the cheekbone.”

“It wasn’t much of the choke, it was more the knee,” said Parisyan, who stayed down holding his face in obvious pain after the tapout. “I couldn’t open my mouth. I didn’t want to take the chance he could break my chin. That’s the first time I ever tapped out in the cage.”

The 33-year-old Gunderson, now 33-13-2, entered the bout on just two weeks’ notice by replacing “Ultimate Fighter” Season 13 alum Shamar Bailey after Bailey was surprisingly halted in the first round by Brazilian Lucas Pimenta Borges. Parisyan’s high-profile doldrums continue as the judo practitioner is just 1-4 in his last five bouts with three stoppage losses.

Brunson, 28, entered the bout on four days’ notice after the Missouri Office of Athletics would not clear Grove’s original opponent, Terry Martin, to fight. As a result, the title bout was contested over just 15 minutes and at a catch-weight of 190 pounds.

The Hawaiian started quickly by establishing his rangy striking, but by the late first round, Brunson’s wrestling reared its head as the three-time Division II All-American for the University of North Carolina at Pembroke power slammed Grove to the mat repeatedly. Unfortunately for Brunson, he was never able to offer clear dominance, as Grove grappled and punched effectively from his back.

With the third round winding down, an illegal Grove upkick on the ground inexplicably prompted referee Mike England to stand the fighters up, whereupon Grove stormed a tiring Brunson with a salvo of late strikes. While it seemed the late offense might prove formative, it turned out to not even be necessary: judges Henry Ellick and Ross Swanberg both saw the fight a shocking 30-27 for Grove, while judge Jerry Griffin reckoned it 29-28 for Brunson, who tasted defeat for the first time in his pro career.

“I was fighting a 5’8 pro boxer, then last minute, I gotta fight a wrestler, a cock-diesel wrestler. It kinda screwed me up mentally,” Grove, now 15-10 (1 NC), confessed after the bout. “But, I’m a fighter, and now I’m the champ. Next time, I’ll come back even harder.”

The night went more according to plan for Strikeforce veteran Lyle Beerbohm, who made a bloody mess of veteran grappler Marcus Aurelio en route to collecting three 30-26 scorecards in their welterweight contest. “Fancy Pants” was strictly workmanlike, single-legging Aurelio to the mat at will, thwarting his guillotine and armbar attempts and painting the canvas with his foe’s blood for the last half of the contest in a dominant shutout.

MMA cult figure and notorious troublemaker Charles “Kid Khaos” Bennett -- formerly known as “Krazy Horse”-- looked like he might be on his way to a surprise submission win in his 150-pound contest with local flavor Chris McDaniel. However, the Branson, Mo., native escaped Bennett’s guillotine and predictably took the Floridian out with a triangle choke at 2:52 of the first round.

Bellator veteran “Smilin’” Sam Alvey ran over Brazilian transplant Lucas Lopes a mere 97 seconds into their middleweight contest, blasting Lopes to the mat and following for the finish.

Virtually unknown Missouiran welterweight Mike Brazzle, owner of a 1-1 pro mark entering the evening, shocked WEC veteran Karen Darabedyan in the first round, pouncing on the blindsided Armenian with punches and swarming to a stoppage at 4:15 of the first round. Darabedyan’s teammate, Sevak Magakian, fared much better on the night, grinding out a unanimous verdict over a href="/fighter/James-Reese-67516">James Reese.

MMA Lab product Chris Gruetzmacher used potent elbows both standing and on the ground to lay waste to Roli Delgado at 3:24 of the third round, while his fellow Arizonan Matt Lucas easily bested Missourian light heavyweight Lucas Overcast, cruising to three scores of 30-27.

At 125 pounds, hometown favorite Jacob Ritchie roused the crowd with a late stoppage of Australia’s Robert Sabaruddin, punching him out at 3:28 of the final frame, while fellow Springfield native Allen Gibson dropped unanimous verdict (30-27, 30-27, 30-27) to Xtreme Couture featherweight Dustin Phillips.

This item was updated June 18, 2012, at 7:53 p.m. ET. The original item incorrectly listed the outcome of the Sam Alvey-Lucas Lopes bout.