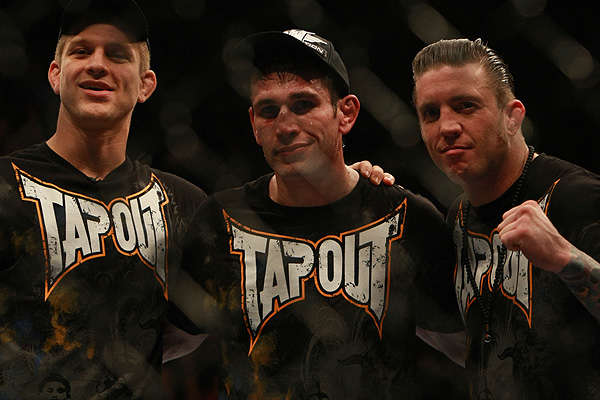 Amir Sadollah (center) is back in action May 15. | Photo: Dave Mandel


The fight bill for UFC on Fuel TV 3 continues to develop, as promotion officials announced Saturday night that a trio of contests has been added to the May 15 event.

“The Ultimate Fighter” Season 7 winner Amir Sadollah will take on Jorge Lopez in a welterweight contest, while Cody McKenzie and Aaron Riley tango at 155 pounds. Additionally, Brad Tavares and Dongi Yang will lock horns in a middleweight affair.

UFC on Fuel 3 is expected to take place at the Patriot Center in Fairfax, Va., and marks the first time the promotion has visited the venue since UFC Fight Night 20 in Jan. 2010. Airing live on Fuel TV, the event will be headlined by a featherweight bout between Chan Sung Jung and Dustin Poirier.

Sadollah, 31, has fought his entire career inside the Octagon, posting a 5-3 record since his time on “TUF 7.” The New Yorker was last seen in August dropping a unanimous decision to veteran Duane Ludwig at UFC Live 5.

Lopez was originally slated to face Sadollah at UFC 143 on Feb. 4, but both fighters eventually withdrew from the event due to injury. “Lil’ Monster” recently had a 10-fight winning streak snapped by Justin Edwards, falling by unanimous decision to the “TUF 13” contestant in September.

Known for his modified guillotine choke finishes, McKenzie has fought with mixed results since his stint on “TUF 12.” Though the Alaskan was victorious at the live season finale in December 2010, McKenzie has lost his last two fights, submitting to Yves Edwards and Vagner Rocha in 2011.

Seven years the elder of his opponent, Riley, 31, began his professional career in 1997. Since rejoining the UFC in 2008, the Indiana native has matched wins and losses in his last six outings, most recently suffering a technical knockout defeat to “TUF 13” winner Tony Ferguson at UFC 135.

Another “Ultimate Fighter” vet, Tavares tasted defeat for the first time as a pro last July, dropping a unanimous decision to Aaron Simpson. Prior to the setback, “Darkness” posted UFC wins over Seth Baczynski and Phil Baroni, outpointing “The Polish Pistola” in 2010 before finishing “The New York Bad Ass” the following year.

One of South Korea’s most famous MMA exports, Yang, 27, looks to rebound from his September defeat to Court McGee. Though “The Ox” was edged by Chris Camozzi in his 2010 UFC debut, he posted his lone Octagon win in his sophomore effort at UFC Live 3 this past March, knocking out Rob Kimmons in the second round.