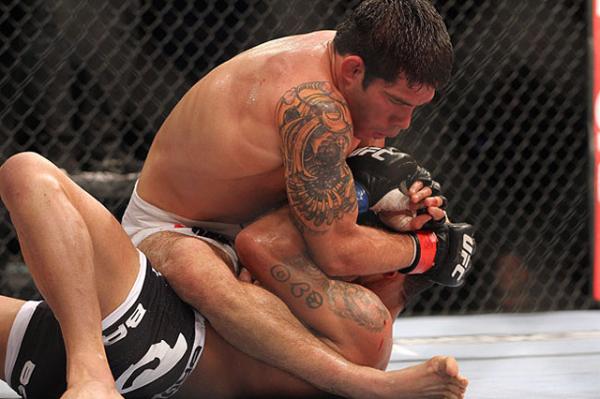 
Another person of intrigue has made his presence known in the bantamweight division.

Atlanta-based Brazilian Raphael Assuncao submitted Vaughan Lee with a second-round armbar at UFC on Fuel TV 10 “Nogueira vs. Werdum” on Saturday at the Paulo Sarasate Gymnasium in Fortaleza, Brazil. Lee (13-9-1, 2-3 UFC) asked out of the match 1:51 into round two, handing Assuncao his fourth straight win at 135 pounds.

Assuncao (20-4, 4-1 UFC) kept the Englishman off stride with punching combinations, clinches and takedowns. The 30-year-old Brazilian jiu-jitsu black belt grounded Lee in the second round, moved to mount and transitioned to the fight-finishing armbar. It was Assuncao’s first submission victory in nearly five years.


Macaco Gold Team’s Felipe Arantes put away “The Ultimate Fighter: Brazil” Season 1 finalist Godofredo Castro with first-round punches and elbows in a preliminary featherweight clash. Arantes (15-4-1, 2-1-1 UFC) brought it to a rousing close 3:32 into round one.

Castro (9-2, 1-2 UFC) was in command early, as he swept his fellow Brazilian with a kimura from the bottom and settled into full mount. Punches fell next, but Arantes answered with a sweep of his own, moved into top position and unleashed a torrent of blows, many of them elbows, that resulted in the stoppage. 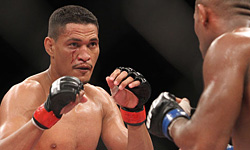 
Takedowns, straight punches and some well-timed knees carried Ildemar Alcantara to a one-sided unanimous decision over previously unbeaten Chute Boxe representative Leandro Silva in an undercard duel at 170 pounds. All three judges arrived at the same decision: 30-27 for Alcantara (19-5, 2-0 UFC), who has rattled off nine victories in a row.

Alcantara’s 78-inch reach was a significant factor in the fight, along with his airtight takedown defense.

The 30-year-old Brazilian peppered Silva (11-1-1, 0-1 UFC) with punches up the middle and kept him on the defensive for much of their 15-minute affair. Alcantara sealed his latest conquest in the third round, where he neutralized his countryman with a takedown and ground-and-pound. 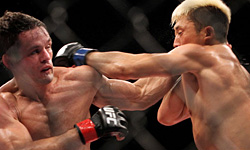 
“The Ultimate Fighter: Brazil” Season 1 graduate Rodrigo Damm leaned on a first-round takedown, a series of right hands and a spectacular third-round suplex in capturing a split verdict from former Sengoku champion Mizuto Hirota in an undercard scrap at 145 pounds.

Damm (11-6, 2-1 UFC) came out of the gate in better shape, as he secured a takedown and tagged the Japanese veteran with several right hands inside the first five minutes. Hirota responded in the second round, as he utilized a stout jab and had the Brazilian jiu-jitsu black belt on his heels. Round three was difficult to call, though Damm seemed to swing it in his favor with a memorable suplex in the final minute. 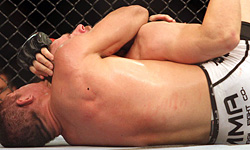 Photo: M. Alonso
Magalhaes rallied to catch Vemola.
Caio Magalhaes coaxed a tapout from London Shootfighters export Karlos Vemola with a second-round rear-naked choke in a preliminary middleweight scrap. Vemola (9-4, 2-4 UFC) raised the white flag 2:49 into round two, as he lost for the third time in four outings.

Magalhaes (6-1, 1-1 UFC) weathered some serious ground-and-pound from the 27-year-old Czech in the opening frame and turned the tide in the second. There, the Brazilian jiu-jitsu black belt brought Vemola to the ground, softened him with punches and ultimately transitioned to his back.

The choke came next, and the tapout was not far behind. 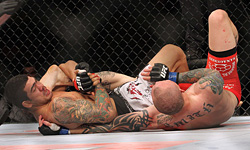 Photo: M. Alonso
Neto violently forced Smith to tap.
Antonio Braga Neto submitted Strikeforce alum Anthony Smith with a first-round kneebar in an undercard battle at 185 pounds. Smith (17-10, 0-1 UFC), who entered the cage with wins in nine of his previous 11 bouts, tapped out 1:52 into round one.

Neto (9-1, 1-0 UFC) struck for a takedown against the fence, wound up on the bottom during the ensuing scramble and latched onto his opponent’s exposed left leg. Moments later, as excruciating pain took hold, Smith was conceding defeat to the kneebar. The 25-year-old Neto has submitted his last four foes.