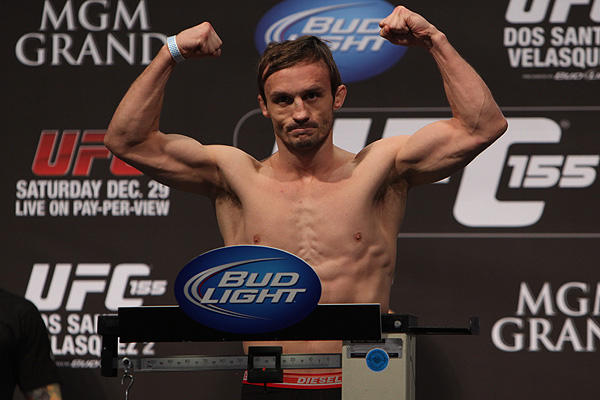 Hard-punching British bantamweight Brad Pickett will return to the Octagon on April 6 when he collides with American veteran Mike Easton at UFC on Fuel TV 9.

The event, which takes place at Ericsson Globe Arena in Stockholm, is headlined by a pivotal light heavyweight showdown between Gegard Mousasi and Alexander Gustafsson and marks the UFC’s sophomore trip to Sweden. The evening’s main card airs live on Fuel TV, while the preliminary card is streamed immediately prior on Facebook. UFC officials announced the Pickett-Easton pairing on Thursday morning.

Pickett, 34, saw a two-fight winning streak snapped in his most recent outing, as “One Punch” was narrowly outpointed by the surging Eddie Wineland on Dec. 29 at UFC 155. Prior to that setback, Pickett had earned back-to-back wins in 2012, submitting Damacio Page with a rear-naked choke in April before knocking out Yves Jabouin this past September at UFC on Fuel TV 5.

Easton, 29, enters the cage on the heels of a Dec. 8 unanimous decision defeat to Raphael Assuncao -- a loss that halted an eight-fight winning streak dating back to 2008. “The Hulk” joined the UFC in 2011, rattling off victories over Byron Bloodworth, Jared Papazian and Ivan Menjivar before running into Assuncao at UFC on Fox 5.