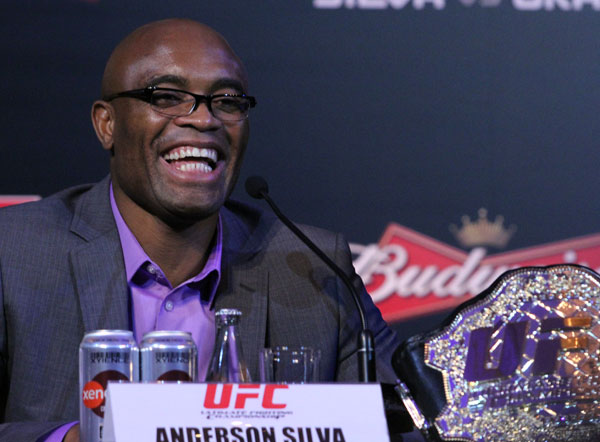 According to the release, the proceeding will be held at the Windsor Barra Hotel in Barra da Tijuca at 11 a.m. local time, and members of the Brazilian media will have the opportunity to interview all three UFC representatives following the presser.

While the exact purpose of the event was not revealed in the release, Sherdog.com has learned from a source close to the situation that the promotion will likely reveal a change of plans for Silva’s title defense. According to Sherdog’s source, Silva’s clash with Sonnen is no longer expected to go down June 23 at Joao Havelange Stadium due to a logistics conflict with the United Nations Conference on Sustainable Development (Rio+20), which takes place June 20-22 in Rio de Janeiro.

According to Sherdog’s source, the Silva-Sonnen title scrap will likely be transplanted to the main event of UFC 148 on July 7 in Las Vegas. Meanwhile, UFC 147 is still expected to take place June 23 and host the long-awaited rematch between Vitor Belfort and Wanderlei Silva. Estadio Journalista Felipe Drumond has now emerged as the leading candidate to host the event, though it is not confirmed as of yet. Also known as “Mineirinho,” the venue is an indoor arena in belo Horizonte, Minas Gerais, capable of housing 25,000 spectators. No official announcement has been made regarding any of the potential changes.

Silva and Sonnen first met at UFC 117 in August 2010. After dominating the first four rounds of action, Sonnen made a critical error in the final frame, allowing Silva to cinch a fight-ending triangle choke to retain his middleweight title with just 1:50 remaining in the bout.

Following his defeat, Sonnen was suspended by the California State Athletic Commission after his UFC 117 drug test was flagged for an elevated testosterone to epitestosterone ratio. After a lengthy appeal process, the CSAC suspended Sonnen until his California fight license expired on June 29, 2011. During his time away from the cage, the Oregonian pleaded guilty to one felony count of money laundering in relation to mortgage fraud and was sentenced to two years probation and fined $10,000.

Sonnen returned to action this past October, submitting former WEC light heavyweight champion Brian Stann with an arm-triangle choke at UFC 136. The former NCAA Division I wrestling All-American then bested Michael Bisping in his most recent outing, taking a hard-fought unanimous decision from the Brit on Jan. 28 to earn a second crack at “The Spider.”

Meanwhile, Silva has successfully defended his title twice since submitting Sonnen. First, the Brazilian stopped Belfort in February 2011, knocking “The Phenom” flat with a devastating front kick to the jaw and finishing the job with ground-and-pound. The lanky southpaw also turned away Yushin Okami in their rematch at UFC 134 this past August, dominating “Thunder” both from range and in the clinch before finishing Okami by technical knockout in round two.

Marcelo Alonso contributed to this report