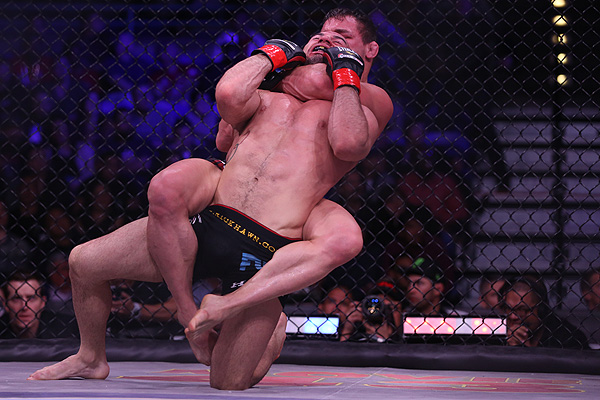 
The gulf between Michael Chandler and the rest of the Bellator Fighting Championships lightweight division appears to have widened.

Chandler (11-0, 8-0 Bellator) kept his 155-pound title with a second-round submission of Rick Hawn at Bellator 85 on Thursday at the UCI Bren Events Center in Irvine, Calif. Hawn tapped out 3:07 into round two, finished for the first time as a professional mixed martial artist.

“I’ve got a lot of improving to do, I’ll tell you that much,” Chandler said. “You’ve got to surround yourself with the best people you can and try to be the best person you can. If you’re not moving forward, you’re moving backward. That’s me.”

The undefeated champion never allowed Hawn (14-2, 6-2 Bellator) to gain a foothold in the match. He struck for his first takedown less than 90 seconds into round one, kept the judoka pinned to the canvas and methodically established his superiority. In the second round, Chandler delivered another double-leg takedown, transitioned to Hawn’s back during a scramble and cinched the choke in a blink, bending the challenger backwards and elicited the tapout. Photo: D. Mandel/Sherdog.com
Curran edged Pitbull on two scorecards.
In the first of two title bouts, Pat Curran retained his featherweight crown with a narrow split decision over Patricio “Pitbull” Freire. Two of the three cageside judges, Michael Bell and Ron McCarthy, scored it 48-47 for the champion; a third, Gene LeBell, cast a dissenting nod in favor of Freire (17-2, 5-2 Bellator).

Curran’s stiff left jab was his weapon of choice and left the Brazilian challenger bloodied and swollen by fight’s end. Freire was the more active of the two men for vast stretches of the 25-minute battle -- he wobbled his foe with a head kick in the third round and a counter right hook in the fifth -- but his aggression came at a price, as he left openings through which Curran (18-4, 8-1 Bellator) could attack up the middle.

Jabs, two and three at a time, kept Freire off-balance and out of a comfortable rhythm. Curran mixed in nice counter punches and blows the body, ultimately forcing the Brazilian jiu-jitsu black belt to attempt takedowns in the fourth and fifth rounds. Both tries failed, and Curran resumed firing his punches and knees down the pike. Sobral was in control, up until the Russian landed a perfectly timed and exquisitely placed spinning-back fist in the final minute of the first round. The blow staggered the Brazilian, and Zayats (20-6, 1-0 Bellator) pounced. A left hook sent Sobral to the canvas, and a series of hammerfists left referee “Big” John McCarthy no choice but to intervene. Photo: D. Mandel/Sherdog.com
Newton grabbed a bulldog choke to win.
Emanuel Newton kept up his resurgence, as he submitted Bulgarian import Atanas Djambazov with a second-round rear-naked choke in the Bellator Season 8 light heavyweight tournament quarterfinals. Djambazov (17-3, 0-1 Bellator), who entered the cage on a 10-fight winning streak, conceded defeat 2:21 into round two.

Newton (19-7-1, 1-1-1 Bellator) wore down the European newcomer with a steady diet of body kicks, takedowns and ground-and-pound. By the second round, Djambazov had little left in the tank. There, Newton assumed full mount, punched his foe into a vulnerable position and locked down the choke for the finish. Photo: D. Mandel/Sherdog.com
Noe defeated Petruzelli in round one.
Once-beaten Tennessee native Jacob Noe stopped UFC, EliteXC and WEC veteran Seth Petruzelli on first-round punches in the Bellator Season 8 light heavyweight tournament quarterfinals. Noe (10-1, 2-0 Bellator) put the finishing touches on the most significant victory of his career 2:51 into round one.

Petruzelli (14-7, 1-1 Bellator) failed twice to secure takedowns. Noe moved to full mount on his second attempt and unleashed a series of left hands. Petruzelli, perhaps stricken by a knee injury, offered nothing in terms of defense, forcing referee Jason Herzog to call a stop to the bout. Noe will enter the semifinals on the strength of an eight-fight winning streak. The California-based Luciano (8-4, 1-0 Bellator) secured takedowns in all three rounds, passed his opponent’s guard at will and piled up points with punches from top position. Navarro (4-3, 1-1 Bellator) stayed active from the bottom and did what he could to stay upright, but Luciano was relentless in his pursuit of victory.