“Uncle Creepy” attacked Ortiz’s legs throughout the fight, stuffing takedowns and keeping the action standing. McCall, who won every round on the judges' cards, really turned on the heat in the second frame, dropping his foe with a straight punch and almost finishing the fight on the mat.

The third stanza brought more domination from McCall, and he began to showboat for the crowd. Ortiz was never in the fight past round one. The victory places “Uncle Creepy” in line for a shot at the TPF flyweight strap -- currently held by Darrell Montague. A TPF official informed Sherdog.com that the bout is confirmed for a yet-to-be-decided August 2011 date.

In the evening's co-main event, Isaac DeJesus needed just 2:52 to secure a TKO victory over challenger Russ Miura. Though Miura came out looking to take advantage of the featherweight champ’s ground game, DeJesus managed to escape from bottom position and return to his feet. Then, as the challenger rushed in, DeJesus landed a crushing counter right hook that dropped the Fresno fighter on the canvas face first. From that point, it was academic, as DeJesus followed him down and finished the fight with strikes.

Despite the win, DeJesus was stripped of his title for failing to make weight at Thursday's weigh-ins. Had he won, Miura could have taken the belt. 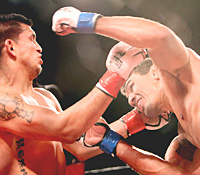 “The Ultimate Fighter” Season 8 winner finally came alive in the third round, landing a flying knee and following it up with ground and pound. Escudero's third-round offense proved to be too little too late, however, as Camoes was awarded the fight 29-28 on all three cards.

Ruiz managed to stay in the fight, throwing the wide, looping haymakers for which he's become known. The Strikeforce vet landed some clean shots, the best of which were kicks, but he never found the finishing shot he was searching for.

After the bout, Harris stated that he broke his hand during the first round. 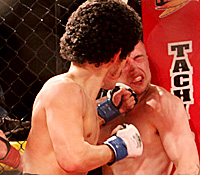 J. Sherwood
Yamaguchi (left) dominated Dunsmoor.
Flyweight contender Mamoru Yamaguchi did not disappoint in his highly anticipated promotional debut, as the Afro-sporting Shooto veteran knocked out Kevin Dunsmoor at 4:03 of the second round.

Dunsmoor was game from the get-go and worked a sound game plan, pressing Yamaguchi against the fence and working from the clinch. However, Yamaguchi managed to create distance and nailed Dunsmoor with clean shots.

His right eye swollen, Dunsmoor appeared noticeably fatigued as the fight wore on until Yamaguchi landed a short left that put the American down for good.

Farkhad Sharipov out-grappled Tommy Vargas for an uneventful unanimous decision in their bantamweight clash. While Sharipov never truly threatened to end the fight, he controlled the action on the ground and did enough to earn the judges’ nod.

Chidi Njokuani, brother of UFC and WEC veteran Anthony Njokuani, picked Alan Jouban apart before finishing the job with a liver kick 1:27 into round three. Jouban offered very little effective offense and spent the majority of the bout on the defensive.

Additionally, Art Arciniega made short work of Josh Herrick, slapping on a triangle at just 1:08 of the first round, while Cody Gibson wowed the crowd by dismantling Walel Watson with a TKO at 4:09 of round two. Brad McDonald outpointed Jesse Bowen for a split decision win, and Kenny Ento had little trouble in knocking out James Chaney at 1:53 of the second frame. Meanwhile, Alex Perez finished Jesus Castro with strikes just 1:56 into their show-opening lightweight contest.