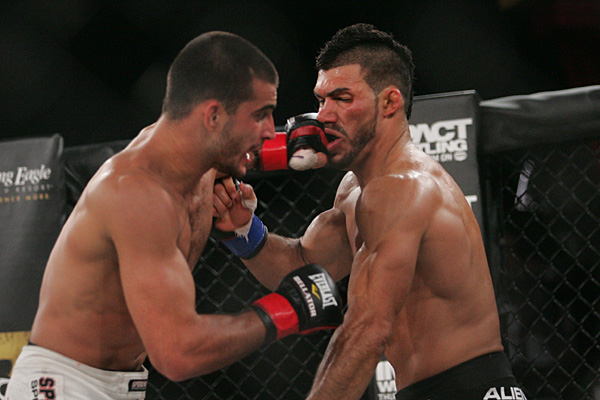 
Andrey Koreshkov can sit back, relax and wait for his next opponent to emerge. Such are the fruits of his labor.

The unbeaten Koreshkov took a unanimous decision from former champion Lyman Good in the Bellator Fighting Championships Season 7 welterweight tournament final at Bellator 82 on Friday at the Soaring Eagle Casino and Resort in Mount Pleasant, Mich. The 22-year-old Russian swept the scorecard by identical 29-28 counts, earning a $100,000 payday and an eventual shot at Bellator’s 170-pound crown. 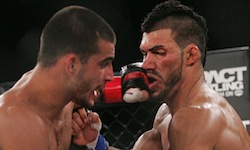 K. Mills
Koreshkov punched his ticket to a Bellator
title shot at 170 pounds.
Koreshkov (13-0, 5-0 Bellator) was a predator on the perimeter, as he ripped punching combinations to the head and attacked the body and legs with kicks. His right uppercut was a Grade-A weapon and floored Good midway through round one. With speed and skill as his hallmarks, Koreshkov routinely beat the Team Tiger Schulmann product to the punch while standing, leaving Good visibly frustrated.

Still, Good did not go down quietly. The chiseled 27-year-old backed up a stout right hand with a takedown in the second round and moved to Koreshkov’s back with little resistance.

From there, he fished for the rear-naked choke, but his efforts went for naught and the Russian escaped back to his feet. Koreshkov tired down the stretch, but he answered a Good takedown in round three with one of his own. He kept the American pinned to the mat for the final 2:05, avoiding a restart with some timely ground-and-pound.

Koreshkov will next face the victor of the forthcoming welterweight title bout between reigning champion Ben Askren and Season 6 tournament winner Karl Amoussou sometime in 2013. 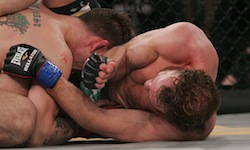 K. Mills
Rickels offense in all positions earned him
the unanimous decision win.
Bellator Season 6 welterweight tournament semifinalist David Rickels scrambled, clinched and struck his way to a unanimous decision over the previously unbeaten Jason Fischer in the 160-pound catchweight co-main event. All three judges scored it for Rickels (11-1, 5-1 Bellator): 30-27, 29-28 and 29-28.

Fischer (5-1, 2-1 Bellator) gave “The Caveman” fits in the first round with his speed and accurate punches, particularly the jab. Rickels established his foothold in the second, as he moved briefly to mount and opened a cut on his foe’s left brow.

The 23-year-old Kansas native carried the newfound momentum into round three, where he dodged a kimura, attacked effectively with elbows from the bottom and threatened Fischer with an armbar. That led to a bizarre exchange in which the Mash Fight Team product stepped on Rickels’ face and neck in a desperate but ultimately successful attempt to free his limb.

“He was definitely game, and I give him mad props,” said Rickels, who plans to set up shop at 155 pounds. “We both landed some good shots.” 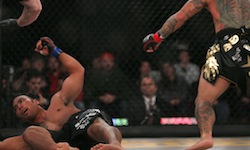 From the start, the two middleweights fired at one another with reckless abandon. Hose caught “The Rhino” with a thudding knee from the clinch but let his guard down in his haste to follow up. Marshall then clipped the oncoming Hawaiian with a counter left hook and sent a dazed Hose careening to the canvas, his head bouncing violently off the mat. Just like that, it was over.

“Somebody get that man some Advil,” said Marshall, who has now finished six opponents in 69 seconds or less. 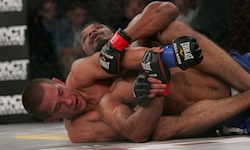 The 23-year-old RusFighters Sport Club representative ran circles around Hervey (15-13, 0-1 Bellator). He struck for half a dozen takedowns and mounted the King of the Cage mainstay on five different occasions. Sarnavskiy set the stage for his rout in the first round, where he grounded Hervey twice and nearly finished him with an armbar. 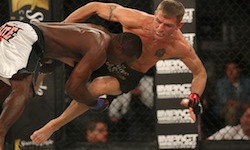 K. Mills
Chad Coon saw a bunch of takedowns.
Takedowns, a suffocating top game and some mild ground-and-pound carried two-time Olympic wrestling hopeful Shawn Bunch to a unanimous decision over Chad Coon in a bantamweight showcase. All three cageside judges scored it the same: 30-27 for the debuting Bunch (1-0, 1-0 Bellator).

Anchored at the American Kickboxing Academy in San Jose, Calif., Bunch struck for takedowns in all three rounds. Coon (0-3, 0-1 Bellator) forced multiple restarts from his back, but, outside of a few leg kicks and a flying knee, he was a non-factor in the 15-minute bout.

Bunch sapped what remained of his overmatched foe’s hopes in the third round, where he delivered another takedown and scored with body-to-head ground-and-pound. 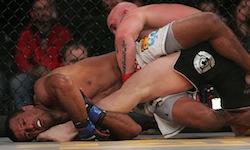 K. Mills
Santana took a leg home for a change instead.
Team Oyama’s Giva Santana submitted Brendan Seguin with a kneebar 2:33 into the second round of their middleweight bout; King of the Cage veteran Terry Davinney knocked out Matt Van Buren 15 seconds into round one of their matchup at 205 pounds; Jeremy Czarnecki captured a unanimous verdict over longtime rival Justin Houghton in their featherweight battle, sweeping the scorecards by identical 29-28 marks; John Schulz kept his perfect record intact, as he stopped Hector Garcia on punches from the mount 2:45 into the third round of their catchweight affair; and Razor Fight Team export Mario Navarro submitted Anthony Bain with a triangle choke 3:18 into round two of their featherweight duel.