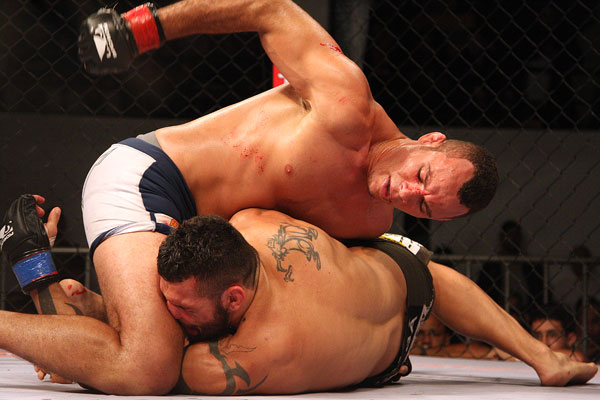 
RIO DE JANEIRO -- It took eight rounds, five of them as an underdog, but Andre “Chatuba” Santos proved that Saturday was his night.


Advertisement
Santos’ performances on the evening were nothing short of flawless. In the quarterfinals, he faced the dangerous Ivan Batman, who entered the bout on a four-fight win streak, all first-round stoppages. Santos appeared the more prepared fighter, controlling the first round with takedowns, but he fell behind in the second, leading to a majority draw. In the extension round, Santos’ conditioning made the difference, as he twice took Jorge to the mat and earned a unanimous pass to the semifinals.

Fighting again as an underdog, Chatuba surprised Crocota, who made his way to the bout by recovering from an early knockdown and submitting Moises dos Santos earlier in the evening. Santos dominated the UFC veteran for two rounds, defending Oliveira’s guillotine attempts and earning a total of five takedowns. Judges Joao Claudio, Alessandro Souza and Wagner Tulio again sided unanimously with Santos, sending him through to meet Soares. 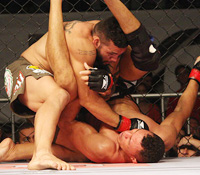 M. Alonso
Soares (top) reached the finals.
Soares’ path to the final was easier, but also took four rounds. He first defeated newcomer and Murilo Bustamante pupil Gerson “Gersinho” Conceicao in a controversial majority decision (20-18, 19-19, 20-19) which could easily have seen a third round. In the semifinals, Soares easily defeated Julio “Merenda” Cesar after two strategic rounds (20-18, 19-19, 20-18), dominating on the feet and using the striking game to shorten the distance before landing some important takedowns.

The stirring tournament final was a testament to overcoming adversity, and to luta livre’s value to MMA. Both Santos and Soares hail from the favelas of Rio de Janeiro, and both started their careers under the tutelage of Renovacao’s Marcio “Cromado” Barbosa. It was Santos who put on one of the finest performances of his career, however, dominating Soares while taking close instruction from his versatile corner, which included his luta livre, muay Thai and jiu-jitsu instructors. 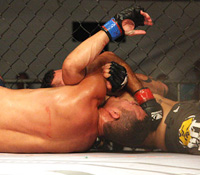 M. Alonso
Chatuba’s anaconda choke is lethal.
Santos landed flurries of punches on the feet and took down Soares at will during the first two periods of the three-round affair. Not showing any fatigue, Chatuba continued to move forward in the third, pressuring his opponent into the fence and landing another takedown. From there, Santos applied his trademark anaconda choke, forcing the tap at 2:41 of round three to become Bitetti Combat’s first welterweight champion.

The non-tournament highlight of the night was Ismael “Marmota” de Jesus’ devastating, 26-second knockout of Alexandre “Macaco” Goncalves. After a brutal straight punch caught Goncalves square on the chin, he fell backward to the mat and remained prone for approximately five minutes.

Also impressive was Eduardo Herdy, a BJJ black belt and official from Rio’s Coordinating of Special Resources (CORE), who knocked out the more experienced Fabiano Conceicao.