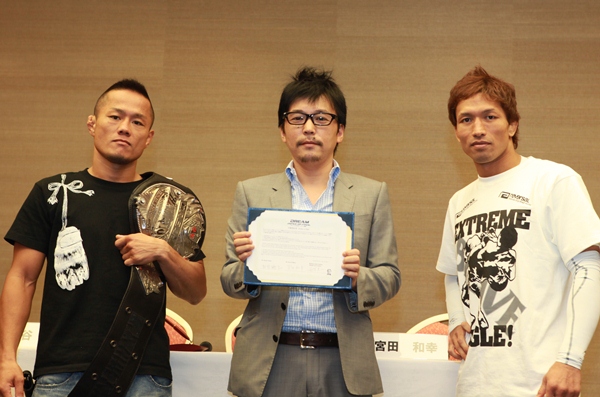 Fickett, who entered as a late replacement for the injured Willamy Freire last week, weighed in two pounds over the 154-pound limit for his bout with Tatsuya Kawajiri. Dream officials stated that they would allow Fickett extra time to shed the excess weight and that he would be reweighed later in the evening. An unimpressed and otherwise hostile Kawajiri claimed that though he hopes that Fickett eventually passes his next weight check, he does so in the expectation of “beating [Fickett] back to America.”

Also in the realm of weight issues, the newly minted Marius Zaromskis-Eiji Ishikawa bout was announced as being contested at a 174-pound catchweight. Longtime Japanese veteran Ishikawa stepped up to replace an injured Hayato “Mach” Sakurai yesterday, saving the Zaromskis bout on a card already plagued with injuries. While Sakurai was announced as having a non-specific “leg injury” yesterday, the UFC, Shooto, and Pride veteran made an appearance at Friday’s press conference complete with crutches and a bandaged leg.

Dream event producer Keiichi Sasahara specified that Sakurai had suffered a torn ligament in his right ankle, and that the fighter would be on the shelf for at least a month.

Wincing through pain, an apologetic Sakurai made a statement of his own, claiming, “I don’t know what to say. To the fans, Mr. Zaromskis, Mr. Ishikawa, and our associated teams, I’d like to truly apologize. I really wanted to fight because this would have been my 50th fight. I’ve fought for the last twenty years, but I’ve never injured myself just before a fight like this.”

Headlining Saturday night’s event will be current Dream featherweight champion Hiroyuki Takaya, who takes on the surging Kazuyuki Miyata, undefeated in his last six bouts. The 2000 Sydney Games Olmypian promised to put the champion through the gamut of his wrestling abilities, while Takaya made a simpler promise of “wildness and violence.”