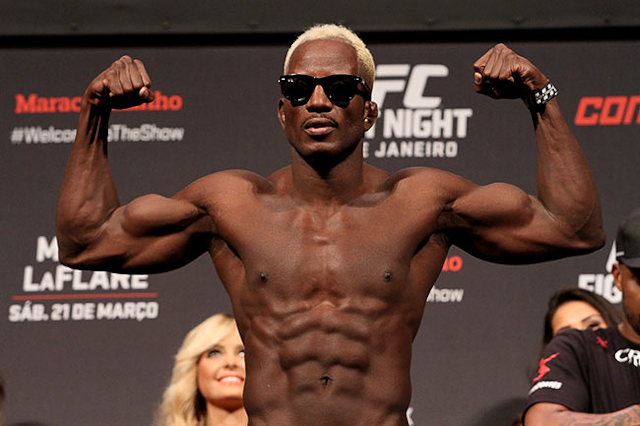 Jorge Oliveira has been suspended for one year. | Gleidson Venga/Sherdog.com


Jorge Antonio Cezario de Oliveira tested positive for the anabolic steroid stanozolol at UFC Fight Night "Maia vs. LaFlare" on March 21, according to a statement released on Thursday by the Brazilian MMA Athletic Commission (CABMMA).

As a result, Oliveira will be suspended for one year retroactive to the event. The fighter and his team have been informed of the result, according to CABMMA. Marcio Cromado, Oliveira’s coach at Renovacao Fight Team, told MMAFighting.com that his fighter has denied using anything illegal and plans on appealing the result.

CABMMA announced on Wednesday that all 24 athletes competing on the UFC Fight Night card passed their drug tests. However, there was an error in the commission’s initial findings.

“A communication error was identified by the Executive Committee when issuing the drug test results from UFC Fight Night ‘Maia vs LaFlare’ held on March 21st of 2015 due to a misinterpretation of the partial report sent by the UCLA Olympic Analytical Lab (WADA Accredited Lab), where tests were analyzed and results confirmed,” the statement read.

“Therefore, the Brazilian MMA Athletic Commission (CABMMA) hereby states that the athlete Jorge Antonio Cezario de Oliveira tested positive for anabolic steroid stanozolol. This last sample code and its result were sent a day apart from the initial report, which in this case, was the reason of not being mentioned in the commission's initial statement.”

CABMMA confirmed that the remaining 23 athletes on the card, who were screened upon their arrival at the arena for anabolic steroids, drugs of abuse, stimulants, diuretics and other masking agents, tested negative, as did the six fighters who were randomly tested for erythropoietin (EPO).

The 35-year-old Oliveira succumbed to a Christos Giagos rear-naked choke 3:12 into the opening frame of their lightweight bout at Maracanazinho Gymnasium in Rio de Janeiro. It was the second consecutive loss in the Octagon for the Renovacao Fight Team member.