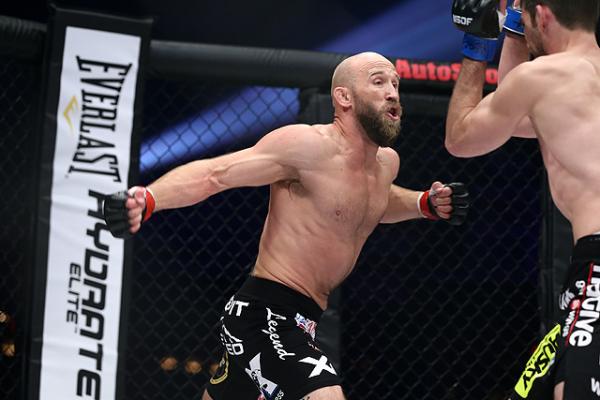 Josh Burkman is headed back to the UFC. | Dave Mandel/Sherdog.com

UFC President Dana White announced the news on Friday. Shortly thereafter, White revealed that Burkman will face Hector Lombard at UFC 182. Burkman last appeared in the Octagon on Oct. 25, 2008, when he lost a unanimous decision to Pete Sell at UFC 90. On Sept. 2, WSOF revealed that it had signed “The People’s Warrior” to a three-fight contract extension, but apparently Burkman was granted his release from that deal.

Burkman, 33, has posted a 9-2 mark outside of the UFC, including a 4-1 stint with WSOF. His most memorable victory with the Ray Sefo-led promotion likely came at WSOF 3, when he submitted fellow UFC veteran Jon Fitch in 41 seconds. The Utah native came up short in his bid for WSOF gold, tapping to a triangle choke from Steve Carl at WSOF 6 last October.

The Pit Elevated Fight Team rose to prominence as a contestant on Season 2 of “The Ultimate Fighter.” He posted a 5-5 mark in the Octagon before his release. In addition to Fitch, Burkman owns triumphs over the likes of Drew Fickett, Josh Neer, Gerald Harris and Aaron Simpson during his 37-bout professional career.

Lombard, meanwhile, hasn’t competed since March, when he captured a dominant three-round verdict against Jake Shields at UFC 171. The former Bellator titlist is 3-2 in the Octagon, with victories over Rousimar Palhares, Nate Marquardt and Shields. “Showeather” was expected to face Dong Hyun Kim at UFC Fight Night in Macau on Aug. 23 but had to withdraw due to a herniated disc.

UFC 182 takes place in Las Vegas on Jan. 3 and features a pair of title bouts, as Jon Jones defends the light heavyweight strap against Daniel Cormier, while Ronda Rousey squares off with Cat Zingano in a women’s bantamweight championship clash.