In a rematch of their July 2009 encounter which Yamaguchi won by split decision, the champion was tenacious, engaging her challenger from the opening bell. Both women landed hard punches in the opening frame and stalemated one another in the clinch against the fence. However, the second frame appeared to tip in favor of Takabayashi. As Yamaguchi continued to press forward with kicks, Takabayashi countered with punches and held the champ in the clinch, foiling the champion's attempts to take the fight down.

“I needed to be aggressive and just hit, hit, hit. But there were moments where I just kind of stopped. I just wanted to break away to punch, but she was really strong and good at stopping me and holding on, so I couldn't really strike,” Yamaguchi told Sherdog.com following the bout. 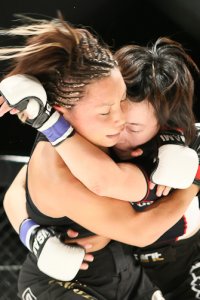 T. Irei
Mei Yamaguchi couldn't take Kyoko
Takabayashi to the ground.
Yamaguchi's frustration became most apparent in the final frame, as Takabayashi continued to work a conservative counter game. Yamaguchi made the effort to put her stamp on the fight by throwing more punches in the final moments, but Takabayashi landed as many sharp counters as she received punches from Yamaguchi. Sherdog.com scored the bout 30-27 for the challenger Takabayashi.

It came as a surprise to the audience in attendance that though WEC and Dream veteran Kenji Osawa judged the fight in favor of Takabayashi, judges Tomoki Matsumiya and Yoshifumi Oyabu ruled the bout a draw. No scores were read.

"I thought that Takabayashi might have got the decision, but I did land some good front kicks and round kicks,” Yamaguchi confessed.

It was the first title defense for the 27-year-old Yamaguchi, who shocked longtime female pound-for-pounder Yuka Tsuji in just 76 seconds to win the title in February.

In other title action, Rin Nakai busted up Mizuho Sato in the clinch to take Valkyrie's vacant open weight championship.

The female titan took the fight to Sato, charging in with punches before smashing Sato against the cage. From the clinch, both women traded knees, but it was Nakai's more frequent and harder knees to the head and body that made the difference.

While Sato made it to the first horn, she was unable to make it for the second round as the ringside doctor inspected her eyes and was dissatisfied with what he saw. He called the fight then, to the teary protests of Sato. The 24-year-old Nakai upped her unbeaten record to 9-0 in her Valkyrie title triumph. 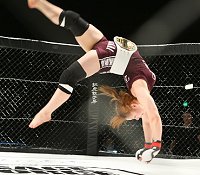 Sugiyama controlled Tamada against the fence, scoring with knees. In the first and second periods, "Sugi Rock" also brought Tamada to the mat where she passed to side control and mount, smashing the champ with punches as Tamada vainly looked for footlocks. After three rounds, all three judges gave the decision to the non-title challenger. The upstart Sugiyama pushed her record to 3-0 with the mild upset.

Ayame Miura was able to takedown "Super Benkei" Mayumi Aoki again and again over three rounds, winning a unanimous decision due to her hard punching.

Emi Fujino dispatched Anna Saito in frighteningly quick fashion, blasting her with punches, jumping on her back, and choking her unconscious in just 24 seconds. Saito woke up shortly after, and attempted to fight off referee Yoshinori Umeki, not realizing the fight was over and that he was not her opponent.

Chisa Yonezawa pounded the hapless Mika Harigai from mount and back mount until referee Tomoki Matsumiya showed mercy, calling the stop in the third period at the 2:24 mark.

Megumi Morioka pounded her way to a unanimous decision over Kimie "Sakura" Okada in the evening's opening bout.

In the Cage Force half of the GCM doubleheader, Sengoku Raiden Championship veteran Kenta Takagi upset Shooto 168-pound Pacific Rim champion Yoichiro Sato in the main event. The ending was anticlimactic, as Sato was stopped early due to a cut at the corner of his left eye.

Sato was the aggressor early with hard punches, but Takagi returned fire with counterpunches of his own. In an early exchange, a right elbow from Takagi clipped the left side of Sato's face, opening a cut that streamed blood down onto his chest. 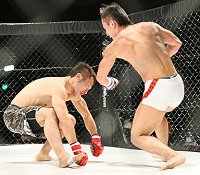 T. Irei
Takuya Eizumi punched out
"Tiger" Ishii in round two.
Referee Yoshinori Umeki called a temporary stop to the action to have Sato checked by the cageside physician who promptly told the referee that the cut was too deep to allow the bout to continue. Takagi was rendered the unceremonious winner at 42 seconds in the first period.

In the evening’s most thrilling bout, featherweights Tashiro "Akai" Nishiuchi and Naohiro Mizuno had a blistering 15-minute striking exchange with “Akai” getting the nod on all three cards.

Mizuno started strong, landing stinging right and left crosses. Nishiuchi adjusted, evading the punches and landing hard kicks to the body. “Akai” thoroughly took over in the second period, dropping Mizuno and taking his back to threaten with chokes. Mizuno came back to reassert his strong jab in the third round, but it was too little, too late, as Nishiuchi took the unanimous nod.

After spending the first round on bottom, Pancrase veteran Takuya Eizumi turned his fight with Takehiro "Tiger" Ishii around early in round two. Eizumi captured an errant Ishii kick, tripping “Tiger” to his back and swarming with punches until the fetal Ishii was rescued by referee Tomoki Matsumiya just 36 seconds into the second frame. 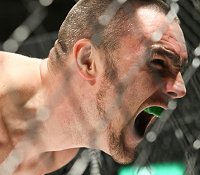 T. Irei
Stewart Fulton was victorious
in a mere 35 seconds.
Masayoshi "Randleman" Ichikawa went toe-to-toe with Komei Okada, bloodying the veteran before polishing him off with punches at the 2:49 mark of the second round.

Koji Ando whipped Hiroaki Sakuma to the canvas and pounded him to a stoppage in just 26 seconds.

Stewart Fulton smashed Mitsumasa Matsumoto in a mere 35 seconds, dropping the Japanese light heavyweight in a heap against the cage and finishing the job with pulverizing ground-and-pound.

The Outsider veteran Asuka Mikami counterpunched his way to a three-round unanimous decision over Yuya Kaneuchi, who suffered a swollen left eye and a bloody nose.

Mamoru Uoi crushed Daisuke Sugishima with a huge right hand that made Sugishima go rubbery just 38 seconds into the fight.