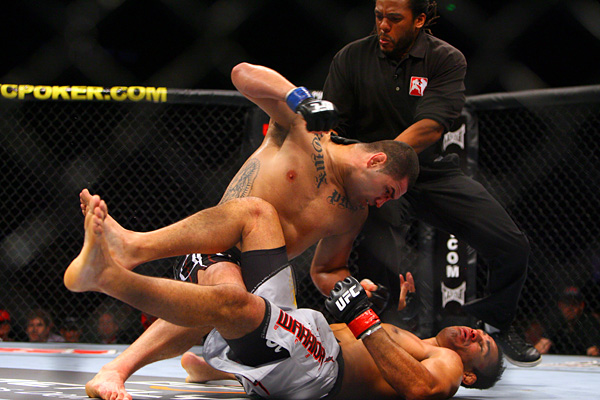 The undefeated Cain Velasquez handed Antonio Rodrigo Nogueira a savage beating in the UFC 110 “Nogueira vs. Velasquez” main event on Saturday at the Acer Arena in Sydney, Australia. Velasquez brought a decisive end to the one-sided heavyweight match, as he buried the Brazilian legend under a volley of violent strikes 2:20 into the first round.

Velasquez never let Nogueira get out of the gate. He landed thudding leg kicks throughout the brief encounter and then went to work upstairs. The American Kickboxing Academy thoroughbred leveled Nogueira with a two-punch combination before finishing him with five unanswered punches on the ground.

“I trained hard for this fight, for the stand-up part of it,” Velasquez said. “We were planning on pushing the pace wherever we could. Stay on the outside, work the stand-up, and, when the takedown was there, take it. Just kind of keep him off balance the whole time.”

The blitz left the durable Nogueira in a helpless state and forced referee Herb Dean to intervene on his behalf. Still the only man to hold championships inside Pride and the UFC, the Brazilian legend had nothing but praise for Velasquez. In what many will see as a career-defining performance, the 27-year-old Salinas, Calif., may have launched himself to the front of the line of challengers awaiting heavyweight titleholder Brock Lesnar’s return.

“Of course, I’m disappointed about this fight,” Nogueira said. “He had fast hands tonight, and he deserved to win. He was an upcoming guy. He’s one of the best fighters in the heavyweight division.” 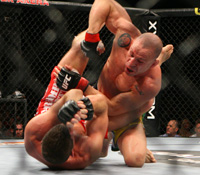 Silva finished the three-round duel with a flurry, as he put an exclamation point on the victory in the last 10 seconds. He swarmed Bisping against the cage, dropped him with a winging right hand behind the ear and closed the fight with power punches on the ground. To that point, the result of the middleweight bout appeared very much in doubt.

Back under the wing of longtime mentor Rafael Cordeiro, Silva worked patiently through the match, leaning heavily on leg kicks and end-of-the-round flurries.

“He’s an unbelievable coach,” Silva said. “For me, he’s the best coach in the world. He’s very, very important.”

Bisping had his moments, too, as he scored with multiple takedowns, straight right hands and his most efficient offensive weapon -- the jab. However, it was not enough in the eyes of the judges. The 30-year-old Wolfslair Academy product had won four of his previous five fights.

“It was an absolute pleasure stepping in here with somebody like Wanderlei,” Bisping said. “I grew up in this sport watching him fight. I know there was a bit of bad blood leading into the fight, but, truly, I do have absolute respect for the guy.”

In his first appearance since June, Silva pieced together enough offense to edge the Englishman on the scorecards, including an attempted arm-in guillotine choke that capped the second round and seemed to turn the tide in his favor. Bisping believes Silva’s final burst was the difference.

“I feel the reason he got the decision was the knockdown right at the end,” he said. “I’m bummed out about it, but Wanderlei is a great opponent.” 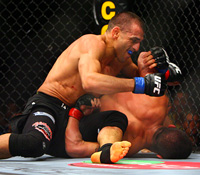 Daniel Herbertson/Sherdog.com
Sotiropoulos vs. Stevenson.
George Sotiropoulos made the most of his showcase opportunity.

Utilizing a multipronged attack on his feet and on the ground, the Australian stayed perfect inside the Octagon in a unanimous decision victory against former lightweight title contender Joe Stevenson. Scores were 30-27 across the board, the crowd exploding into thunderous applause as the decision was read.

“That was a very close fight,” Sotiropoulos said. “I know I won the striking and the ground. I got a couple of reversals on takedowns and a couple of takedowns myself.”

Sotiropoulos set the tone from the start, as he dominated round one on the mat. He mounted Stevenson, planted a mouse between his eyes with an elbow from the top and threatened with an armbar. The 32-year-old kept Stevenson on his heels in the second, as he staggered “The Ultimate Fighter” Season 2 winner with a left hook inside the first minute, escaped an attempted straight ankle lock and cinched an anaconda choke as the horn sounded.

“I was very aware of his submissions, his foot locks and his guillotines,” Sotiropoulos said. “I didn’t feel any danger at any time.”

Now based in Vancouver, Wash., Sotiropoulos peppered Stevenson with punches early in the third round and weathered a pair of takedowns, as he posted his sixth consecutive win and established himself as a viable threat at 155 pounds. 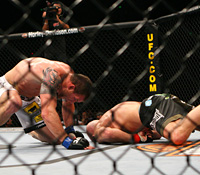 Bader ended a competitive bout 2:10 into round three, when he wobbled Jardine with a straight right hand, followed with a flying knee and put away the Jackson’s Mixed Martial Arts veteran with a clean left hook. The 26-year-old remains unbeaten through 11 professional appearances.

“I just tried to implement my game plan, kind of stay safe in my own comfort zone,” Bader said. “I’ve been working on my boxing a lot with the Lally Brothers at [Arizona] Combat [Sports].”

A two-time collegiate All-American wrestler at Arizona State University, Bader controlled round one with takedowns, ground-and-pound and the occasional power punch. Jardine seemed to bounce back in the second, as he neutralized his opponent’s wrestling advantage with his sprawl, landed his trademark leg kicks and held his own in the standing exchanges.

Known for his awkward style, the 34-year-old Jardine has lost three consecutive fights, the last two by knockout. 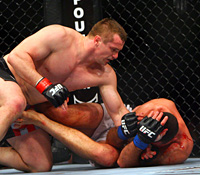 Daniel Herbertson/Sherdog.com
Cro Cop vs. Perosh.
Mirko “Cro Cop” Filipovic needed two full rounds to dispatch late replacement Anthony Perosh, as he won for the third time in four fights. Referee Herb Dean halted the match in between rounds two and three after Filipovic opened a vertical gash on the Australian’s forehead with an elbow from inside his guard.

Filipovic sprawled flawlessly throughout the 10-minute encounter, stuffed every one of Perosh’s attempted takedowns and battered the Brazilian jiu-jitsu black belt with straight left hands and right uppercuts. The 37-year-old Perosh, who replaced former International Fight League standout Ben Rothwell on short notice, spent much of the fight on his heels, as the Croatian advanced upon him. Still, he stayed in the fight after the cut, even as blood streamed down his face and onto his chest.

“I was shocked [that he continued],” said Filipovic, the 2006 Pride Fighting Championships open weight grand prix winner. “I appreciate his courage and his guts.”