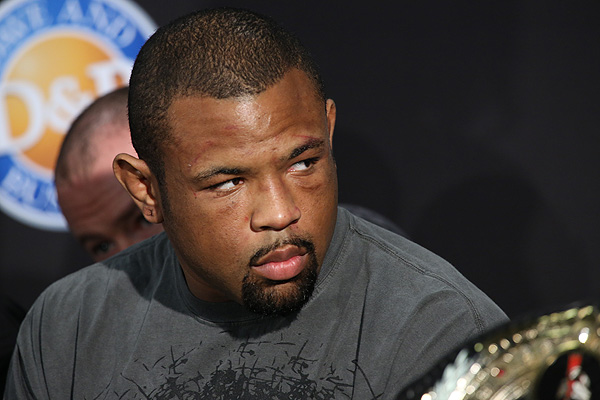 While most Bellator tournament competitors are required to win three bouts in as many months to earn a title shot, Emanuel Newton will need to win a fourth fight on Thursday night when he collides with Mikhail Zayats at Bellator 94.

Just two weeks before the veteran faced the heavily favored Muhammed Lawal in the Season 8 light heavyweight tournament semifinals, “The Hardcore Kid” found himself fighting off a group of racist skinheads while attending a concert to see one of his favorite bands in south Orange County.

While many skinheads do not subscribe to a racist ideology, these men apparently did, and they were unhappy with Newton’s presence at the venue.

“I went to this show -- it wasn’t a hardcore show by any means, but maybe some of the older guys would consider it to be hardcore. Strife, in my opinion, was really the only true hardcore band on this show,” Newton recently told Sherdog.com. “I guess those skinheads kind of frequent that place. I haven’t seen skinheads at a hardcore show since, like, 2001. I saw them, and I was like, ‘Great,’ but there were also a lot of hardcore kids who were there to see Strife, and we definitely outnumbered the skinheads.”

Newton, who is known for his love of hardcore music in addition to his fighting abilities, said he began to dance during Strife’s set when he was provoked.

“The pit had just started, and I could really tell that they were checking us out. I started circle-pitting, and a guy tried to trip me,” said Newton. “I turned and looked, and I knew it was a white power guy. One guy had ‘white power’ tattooed on the back of his head. I went over to my friends and told them to keep their eyes open.”

What happened next was sudden but not unexpected.

“After I warned my boys, one of those guys came up and just blatantly took a swing at me,” Newton recalled. “I saw it coming, of course, so I slipped it and threw a punch that dropped him and put him out. [His friends] then started jumping in. I think one of them shot a double-leg on me, and I was up against the stage. Then some white power girl came up and started swinging at me. I just tucked my chin, put my head down and said, ‘Go ahead and punch me in my forehead and the top of my head all you want. You’re just going to have a broken hand in the morning.’ “All my buddies jumped in, and they just demolished the guys. I didn’t have to do anything more, because all my boys either train MMA or they fight, too. So they came in and just smashed the guys.”

After Strife finished playing, Newton decided to avoid any further entanglements and left the venue.

“Just to let everybody know. In hardcore, there are no skinheads. They don’t understand our dancing. They don’t understand our way of life,” Newton said. “The majority of hardcore kids are different races. There are a lot of [Hispanic fans], especially in California. There are more black hardcore kids all the time. Don’t get me wrong, I’m still usually the only black guy at the show, but there is no racism there.”

Two weeks later, Newton landed another clean shot that put his opponent on the mat -- only this time it was tournament favorite “King Mo.” In Zayats, Newton faces another dangerous dark horse, a challenge for which the fighter said he is well prepared thanks to his time spent at Freddie Roach’s Wildcard Gym.

“Mikhail is tough and brings a lot of things to the table, but so do I. I think I’m a completely different fighter than I was in the first fight of the tournament,” said Newton of his clash with Zayats at the USF Sun Dome in Tampa, Fla. “My trainer’s name is Arnold Chon. He’s a tae kwon do world champion, and he’s been with Freddie [Roach] for a long time. When I fought Mo, I was only with Arnold for like two-and-a-half weeks. Now I’ve had another month with the man, so I’m definitely even better than when I fought Mo.

“With the training that I’ve put in, I think I’m going to be more explosive. I don’t think his sambo is going to be able to keep up with my Greco-Roman and my MMA-style of wrestling. I’m just looking to push the pace and stay in his face.”