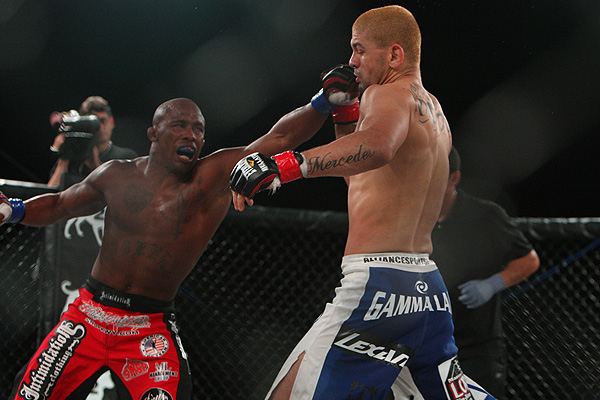 
For the second time in a little more than six months, Marcos Galvao wound up on the wrong side of a controversial verdict from the three-man cageside jury.

The two-time Brazilian jiu-jitsu world champion fell short in his bid to upset the unbeaten Alexis Vila in the Bellator Fighting Championships Season 5 bantamweight tournament semifinals, as he lost a split decision to the 40-year-old Cuban at Bellator 55 on Saturday at the Cocopah Resort and Casino in Yuma, Ariz. Two judges, Luis Cobian and Cardo Urso, sided with Vila (11-0, 2-0 BFC) by matching 29-28 counts. A third, Peter Rogers, ruled 30-27 in Galvao’s favor.

A tentative start between the two unfolded, as Galvao was understandably cautious of Vila’s frightening one-punch knockout power. However, the Nova Uniao representative grew increasingly comfortable in the pocket, scored effectively with counterpunches and kept Vila in an almost constant backpedal, unable to uncork his howitzers. Vila landed his only substantive punch midway through the second round, when he sent a counter right hand through Galvao’s defenses. The Brazilian absorbed the blow and kept moving forward.

Round three clearly belonged to Galvao (10-5-1, 1-2 BFC), as he thumped Vila with right hands and punished his legs with kicks. The 1996 Olympic bronze medalist had nothing left in the tank by fight’s end, his own punches and kicks slowed by fatigue. Still, Vila came out on top where it mattered -- on the scorecards. 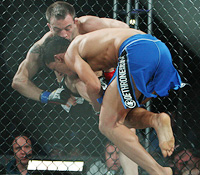 Dantas (12-2, 2-0 BFC) knocked down West with a ringing right hand in the first round and swarmed to finish, but the 27-year-old Apex MMA representative defended well -- he even threatened with an armbar from the bottom -- and ultimately returned to his feet.

Dantas scored with more regularity there, but West dropped him to a knee with a right uppercut with roughly 90 seconds left in the opening stanza. Dantas bounced back and resumed his attack with his hands and feet.

In the second round, Dantas swarmed with punches, seized West’s back in a scramble and maneuvered for a rear-naked choke. West (17-6, 3-2 BFC) again freed himself from danger and later swept into top position. Still, he had difficulty overcoming the disparity in speed and power. A competitive third frame was interrupted with an inadvertent eye poke from West, as Dantas cried out in pain. The fight resumed without issue, and Dantas closed strong, cracking his foe with a left hook. It was the best punch of the round and a fitting exclamation point for the Nova Uniao standout. 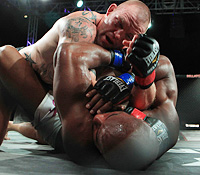 Takedowns, crushing top control and effective ground-and-pound carried the well-traveled Travis Wiuff to a unanimous decision over Bellator light heavyweight champion Christian M'Pumbu in a non-title affair. All three cageside judges scored it for Wiuff: 30-27, 29-28 and 29-28. M’Pumbu’s defeat was the first ever for a Bellator champion in a non-title bout.

Wiuff (65-14, 1 NC, 1-0 BFC) set the stage for the upset from the start, as he delivered his first takedown inside the first half minute of the fight.

He moved to half guard and popped the champion with hammerfists, elbows and short right hands, opening a small cut near M’Pumbu’s left eye. The Congolese champion had a brief opening early in the second round, as he wobbled Wiuff with a knee close to the cage. However, the husky Minnesotan willed himself to a takedown and again scored with his strikes, all while avoiding a triangle choke from the bottom.

Behind on the scorecards, M’Pumbu (18-4-1, 3-1 BFC) nearly turned the tables in round three, as he began to sting the winded challenger with a stiff left jab and straight rights, one of which staggered Wiuff and forced him to retreat to his back. M’Pumbu belted his foe with punches on the ground but failed to finish, leaving himself open for another takedown. Wiuff obliged and controlled the rest of the match from top position. 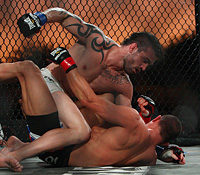 Once-beaten Brazilian jiu-jitsu black belt Ricardo Tirloni made an emphatic statement in his promotional debut, as he submitted EliteXC veteran Steve Gable with a second-round rear-naked choke in a lightweight showcase. Gable (5-2, 0-1 BFC) asked out of the fight 3:54 into round two.

“It’s my dream, and nobody’s going to stop my dream,” Tirloni said. “I want to fight step by step and get the title.”

Tirloni (14-1, 1-0 BFC) controlled the standup between the two 155-pound hopefuls with a steady diet of knees to the body and head, both from the clinch and from distance. The Brazilian stuffed a pair of futile Gable takedowns and worked effectively from top position, opening a cut above the American’s left eye. Tirloni’s ground-and-pound forced Gable to his stomach in the second round, and he cinched the choke with lightning-quick precision, securing the tapout. Tirloni has won 11 consecutive fights.