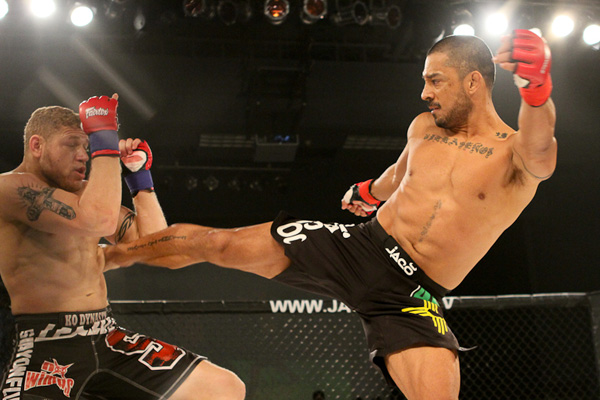 
ALBUQUERQUE, N.M. -- Five months ago, Joey Villasenor returned to fight in his native New Mexico for the first time since 2004.

The bout was memorable -- but for all the wrong reasons: Villasenor and UFC veteran Chris Camozzi battled to a split draw at Shark Fights 15. Some two months later the New Mexico Athletic Commission overturned the decision, ruling that a scoring error had incorrectly awarded the decision to Villasenor.

Rather than dwell on the controversy, Villasenor moved forward. He called Camozzi to congratulate him and then prepared to cut to welterweight after years of competing at middleweight.

When his scheduled 170-pound debut vs. Che Mills at British Association of Mixed Martial Arts 7 on Sept. 10 fell through, he took the time to perfect his weight cut.

At Jackson’s MMA Series 6 on Saturday night, Villasenor announced his presence at the new weight class by earning a technical knockout over Iowa journeyman Chuck Parmelee.

The beginning of the end came when Villasenor caught a hard-charging Parmelee with a short left hook that stunned his opponent. Villasenor wasted little time from there, following up with a barrage of punches before referee Craig Zellner stopped the action at the 2:47 mark of the opening frame.

“I was just waiting for the right shot,” Villasenor said. “He was rushing, being really aggressive. I think I angled out on him and he lost eye contact with me. By the time he looked up I believe I was landing the left hook. My teammates know that I love to box inside the pocket.”

By the time fight night rolled around, Villasenor says he weighed around 190 pounds. He weighed 210 pounds at the beginning of the process and credits nutrition coach George Lockhart -- who aided Jackson’s Mixed Martial Arts teammate Brian Stann in his move from 205 to 185 -- with making the transition easier.

“He sent me a diet plan, a week of cut plan and a reload plan. All I did was go through it and I made 170. It was the easiest cut I ever had. I wasn’t drained,” Villasenor said. 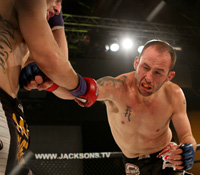 While Lopez had highlight reel slams of Leyva in both the first and second round and opened a cut above Leyva’s nose in the third, it was the Jackson’s MMA representative’s relentless pace that ultimately earned the nod from the judges.

Richard Espinoza scored the bout 30-27 for Leyva, as did J.J. Jaramillo, while Andres Anaya saw it 29-28 in favor of the victor.

“That dude was tough. He threw some bombs, and some of them landed, as you can see,” Leyva said while pointing to his cut.

Crosby was aggressive early, attacking Hunter with his kickboxing and pressing him against the cage. Tucker was able to punish Crosby with knees from that position, however, and after not being able to lock in his first choke attempt, he made Crosby tap at 2:28 of the second round.

“It felt deep a couple of times, but he did a really good job of defending it once it was in,” Tucker said. “Thankfully I got it in the second round.”

Much of the bout was characterized by the excellent defensive guards of both competitors, but the contest was likely decided by a couple of timely Lux takedowns in a closely contested third round.

In the first professional fight of the night, Las Cruces, N.M., native Nate Patterson battered Jackson’s Rich Chavez with low kicks for the duration of their featherweight tussle. With Chavez’s takedown ability limited from the assault, Patterson was able to control the action on the feet and earn a unanimous decision. All three judges scored the contest 30-27 for Patterson.

Albuquerque’s Ricky Esquibel kicked off the amateur portion of the card with a unanimous decision win over Santa Fe’s Juan Carlos Mora in the bantamweight debut for both fighters. All three judges scored the bout 30-27 in favor of Esquibel.